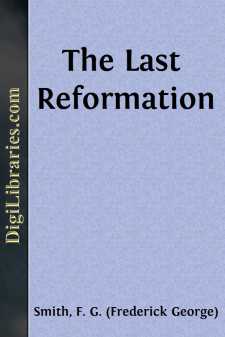 INTRODUCTION "THE TIME OF REFORMATION"

There is a present reformation specially distinguished from all those that have gone before. It is resulting from the particular operation of the Spirit of God as predicted in the Word of God, and its influences are being felt in varying degrees throughout all Christendom. Many Christians are already stirred to action by the conscious knowledge of Christ's message for these times, while multiplied thousands of others who love the Lord Jesus are experiencing within their own hearts the awakening of new aspirations and impulses, the real meaning of which they do not as yet understand, but which are, through the leadership of the Holy Spirit, unconsciously fitting them for their true place in this great world-wide movement which is destined to exceed in importance and influence all other religious reformations since the days of primitive Christianity.

Since, as we shall show, the present reformation is the work of the Spirit affecting all true Christians, drawing them together for the realization of a grand Scriptural ideal, it is evident that no particular band of people enjoy its exclusive monopoly. May the same Holy Spirit illuminate our hearts and minds in the contemplation of the truths of the divine Word.

The term reformation signifies "the act of reforming or the state of being reformed; change from worse to better; correction or amendment of life, manners, or of anything vicious or corrupt." In its application to the religion of Christ, reformation means the correction of abuses and corrupt practises that have become associated with the Christian system; the elimination of all unworthy, foreign elements. In other words, it implies restoration, a return to the practises and ideals of primitive Christianity.

What the final reformation must include

If we inquire concerning the limits of true reformatory work, we see at once that, if there is to be a final reformation, such a movement must restore in its fundamental aspects apostolic Christianity—its doctrines, its ordinances, its personal regenerating and sanctifying experiences, its spiritual life, its holiness, its power, its purity, its gifts of the Spirit, its unity of believers, and its fruits. This assumes, of course, that during the centuries there has been a departure from this standard.

The church itself the real object of reformation

No reformation since apostolic times has covered all this ground. All the reformations taken together fall far short of this standard. They have been reformations only in part, each movement simply placing special emphasis on particular doctrines, or ordinances, or personal experiences....