The Last Penny and Other Stories 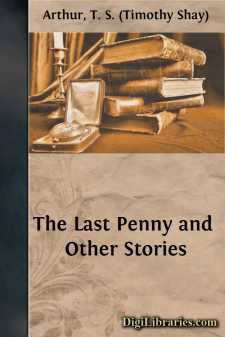 THOMAS CLAIRE, a son of St. Crispin, was a clever sort of a man; though not very well off in the world. He was industrious, but, as his abilities were small, his reward was proportioned thereto. His skill went but little beyond half-soles, heel-taps, and patches. Those who, willing to encourage Thomas, ventured to order from him a new pair of boots or shoes, never repeated the order. That would have been carrying their good wishes for his prosperity rather too far.

As intimated, the income of Thomas Claire was not large. Industrious though he was, the amount earned proved so small that his frugal wife always found it insufficient for an adequate supply of the wants of the family, which consisted of her husband, herself, and three children. It cannot be denied, however, that if Thomas had cared less about his pipe and mug of ale, the supply of bread would have been more liberal. But he had to work hard, and must have some little self-indulgence. At least, so he very unwisely argued. This self-indulgence cost from two to three shillings every week, a sum that would have purchased many comforts for the needy family.

The oldest of Claire's children, a girl ten years of age, had been sickly from her birth. She was a gentle, loving child, the favourite of all in the house, and more especially of her father. Little Lizzy would come up into the garret where Claire worked, and sit with him sometimes for hours, talking in a strain that caused him to wonder; and sometimes, when she did not feel as well as usual, lying upon the floor and fixing upon him her large bright eyes for almost as long a period. Lizzy was never so contented as when she was with her father; and he never worked so cheerfully, as when she was near him.

Gradually, as month after month went by, Lizzy wasted away with some disease, for which the doctor could find no remedy. Her cheeks became paler and paler, her eyes larger and brighter, and such a weakness fell upon her slender limbs that they could with difficulty sustain her weight. She was no longer able to clamber up the steep stairs into the garret, or loft, where her father worked; yet she was there as often as before. Claire had made for her a little bed, raised a short space from the floor, and here she lay, talking to him or looking at him, as of old. He rarely went up or down the garret-stairs without having Lizzy in his arms. Usually her head was lying upon his shoulder.

And thus the time went on, Claire, for all the love he felt for his sick child—for all the regard he entertained for his family—indulging his beer and tobacco as usual, and thus consuming, weekly, a portion of their little income that would have brought to his children many a comfort. No one but himself had any luxuries. Not even for Lizzy's weak appetite were dainties procured. It was as much as the mother could do, out of the weekly pittance she received, to get enough coarse food for the table, and cover the nakedness of her family.

To supply the pipe and mug of Claire, from two to three shillings a week were required....