The Last of the Peterkins With Others of Their Kin 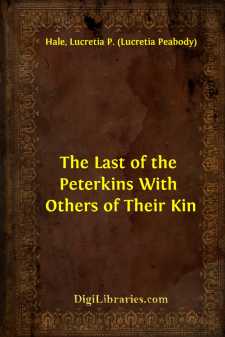 I. ELIZABETH ELIZA WRITES A PAPER.

Elizabeth Eliza joined the Circumambient Club with the idea that it would be a long time before she, a new member, would have to read a paper. She would have time to hear the other papers read, and to see how it was done; and she would find it easy when her turn came. By that time she would have some ideas; and long before she would be called upon, she would have leisure to sit down and write out something. But a year passed away, and the time was drawing near. She had, meanwhile, devoted herself to her studies, and had tried to inform herself on all subjects by way of preparation. She had consulted one of the old members of the Club as to the choice of a subject.

"Oh, write about anything," was the answer,—"anything you have been thinking of."

Elizabeth Eliza was forced to say she had not been thinking lately. She had not had time. The family had moved, and there was always an excitement about something, that prevented her sitting down to think.

"Why not write out your family adventures?" asked the old member.

Elizabeth Eliza was sure her mother would think it made them too public; and most of the Club papers, she observed, had some thought in them. She preferred to find an idea.

So she set herself to the occupation of thinking. She went out on the piazza to think; she stayed in the house to think. She tried a corner of the china-closet. She tried thinking in the cars, and lost her pocket-book; she tried it in the garden, and walked into the strawberry bed. In the house and out of the house, it seemed to be the same,—she could not think of anything to think of. For many weeks she was seen sitting on the sofa or in the window, and nobody disturbed her. "She is thinking about her paper," the family would say, but she only knew that she could not think of anything.

Agamemnon told her that many writers waited till the last moment, when inspiration came which was much finer than anything studied. Elizabeth Eliza thought it would be terrible to wait till the last moment, if the inspiration should not come! She might combine the two ways,—wait till a few days before the last, and then sit down and write anyhow. This would give a chance for inspiration, while she would not run the risk of writing nothing.

She was much discouraged. Perhaps she had better give it up? But, no; everybody wrote a paper: if not now, she would have to do it sometime!

And at last the idea of a subject came to her! But it was as hard to find a moment to write as to think. The morning was noisy, till the little boys had gone to school; for they had begun again upon their regular course, with the plan of taking up the study of cider in October. And after the little boys had gone to school, now it was one thing, now it was another,—the china-closet to be cleaned, or one of the neighbors in to look at the sewing-machine. She tried after dinner, but would fall asleep. She felt that evening would be the true time, after the cares of day were over....