The Last of the Legions and Other Tales of Long Ago 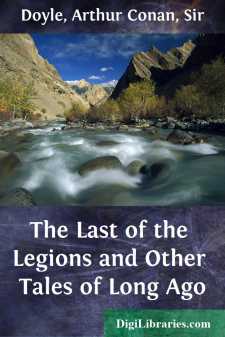 ITHE LAST OF THE LEGIONS

Pontus, the Roman viceroy, sat in the atrium of his palatial villa by the Thames, and he looked with perplexity at the scroll of papyrus which he had just unrolled. Before him stood the messenger who had brought it, a swarthy little Italian, whose black eyes were glazed with want of sleep, and his olive features darker still from dust and sweat. The viceroy was looking fixedly at him, yet he saw him not, so full was his mind of this sudden and most unexpected order. To him it seemed as if the solid earth had given way beneath his feet. His life and the work of his life had come to irremediable ruin.

The man saluted and staggered out of the hall. A yellow-haired British major-domo came forward for orders.

"Is the General there?"

"He is waiting, your excellency."

"Then show him in, and leave us together."

A few minutes later Licinius Crassus, the head of the British military establishment, had joined his chief. He was a large, bearded man in a white civilian toga, hemmed with the Patrician purple. His rough, bold features, burned and seamed and lined with the long African wars, were shadowed with anxiety as he looked with questioning eyes at the drawn, haggard face of the viceroy.

"I fear, your excellency, that you have had bad news from Rome."

"The worst, Crassus. It is all over with Britain. It is a question whether even Gaul will be held."

"Saint Albus save us! Are the orders precise?"

"Here they are, with the Emperor's own seal."

"But why? I had heard a rumour, but it had seemed too incredible."

"So had I only last week, and had the fellow scourged for having spread it. But here it is as clear as words can make it: 'Bring every man of the Legions by forced marches to the help of the Empire. Leave not a cohort in Britain.' These are my orders."

"They will let the limbs wither so that the heart be stronger. The old German hive is about to swarm once more. There are fresh crowds of Barbarians from Dacia and Scythia. Every sword is needed to hold the Alpine passes. They cannot let three legions lie idle in Britain."

The soldier shrugged his shoulders.

"When the legions go no Roman would feel that his life was safe here. For all that we have done, it is none the less the truth that it is no country of ours, and that we hold it as we won it by the sword."

"Yes, every man, woman, and child of Latin blood must come with us to Gaul. The galleys are already waiting at Portus Dubris. Get the orders out, Crassus, at once. As the Valerian legion falls back from the Wall of Hadrian it can take the northern colonists with it. The Jovians can bring in the people from the west, and the Batavians can escort the easterns if they will muster at Camboricum. You will see to it." He sank his face for a moment in his hands. "It is a fearsome thing," said he, "to tear up the roots of so goodly a tree."

"To make more space for such a crop of weeds," said the soldier bitterly. "My God, what will be the end of these poor Britons!...