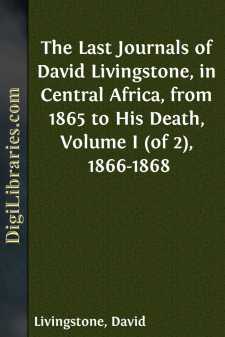 In the midst of the universal sorrow caused by the intelligence that Dr. Livingstone had lost his life at the furthest point to which he had penetrated in his search for the true sources of the Nile, a faint hope was indulged that some of his journals might survive the disaster: this hope, I rejoice to say, has been realized beyond the most sanguine expectations.

It is due, in the first place, to his native attendants, whose faithfulness has placed his last writings at our disposal, and also to the reader, before he launches forth upon a series of travels and scientific geographical records of the most extraordinary character, to say that in the following narrative of seven years' continuous work and new discovery no break whatever occurs.

We have not to deplore the loss, by accident or carelessness, of a single entry, from the time of Livingstone's departure from Zanzibar in the beginning of 1866 to the day when his note-book dropped from his hand in the village of Ilala at the end of April, 1873.

I trust it will not be uninteresting if I preface the history with a few words on the nature of these journals and writings as they have come to hand from Central Africa.

It will be remembered that when Mr. Stanley returned to England in 1872, Dr. Livingstone entrusted to his care a very large Letts' diary, sealed up and consigned to the safe keeping of his daughter, Miss Agnes Livingstone. Upon the confirmation of the worst news, this book was examined and found to contain a considerable portion of the notes which her father made during his travels previous to the time of Mr. Stanley's meeting him.

The Doctor's custom was always to have metallic note-books in use, in which the day's jottings were recorded. When time and opportunity served, the larger volume was posted up with scrupulous care.

It seems, however, that in the last three or four years of his life this excellent rule had to give way to the toils of travel and the exhaustion of most distressing illnesses. Whilst in the Manyuema country he ran out of note-books, ink, and pencils, and had to resort to shifts which at first made it a very debateable point whether the most diligent attempt at deciphering would suceeed after all. Such pocket-books as remained at this period of his travels were utilized to the last inch of paper. In some of them we find lunar observations, the names of rivers, and the heights of hills advancing towards the middle from one end, whilst from the other the itinerary grows day by day, interspersed with map routes of the march, botanical notes, and carefully made drawings. But in the mean time the middle portion of the book was filling up with calculations, private memoranda, words intended for vocabularies, and extracts from books, whilst here and there the stain of a pressed flower causes indistinctness; yet the thread of the narrative runs throughout. Noting but his invariable habit of constantly repeating the month and year obviates hopeless confusion. Nor is this all; for pocket-books gave out at last, and old newspapers, yellow with African damp, were sewn together, and his notes were written across the type with a substitute for ink made from the juice of a tree. To Miss Livingstone and to the Rev. C.A. Alington I am very much indebted for help in the laborious task of deciphering this portion of the Doctor's journals. Their knowledge of his handwriting, their perseverance, coupled with good eyes and a strong magnifying-glass, at last made their task a complete success.

In comparing this great mass of material with the journal brought home by Mr. Stanley, one finds that a great deal of most interesting matter can be added. It would seem that in the hurry of writing and copying despatches previous to his companion's departure, the Doctor rapidly entered up as much from his note-books as time and space permitted.

Most fortunately, he still carried the greater part of these original notes till the time of his death, so that they were forthcoming when his effects were subsequently saved.

This brings us to the second instalment of the journals, for we have thus acknowledged the first to have reached us on Mr. Stanley's return.

When the battered tin travelling-case, which was with Livingstone to the last, was opened at the Foreign Office in the spring of this year, not only were these valuable papers disclosed which I have mentioned, but it was found also that Livingstone had kept a copious journal during his stay at Unyanyembé in some copy-books, and that when his stock of note-books was replenished a daily record of his subsequent travels had been made....