The Land-War In Ireland (1870) A History For The Times 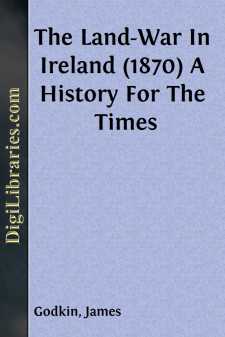 As the hour approaches when the legislature must deal with the Irish Land question, and settle it, like the Irish Church question, once for all, attempts are redoubled to frighten the public with the difficulties of the task. The alarmists conjure up gigantic apparitions more formidable than those which encountered Bunyan's Pilgrim. Monstrous figures frown along the gloomy avenue that, leads up to the Egyptian temple in which the divinity, PROPERTY, dwells in mysterious darkness. To enter the sanctuary, we are solemnly assured, requires all the cardinal virtues in their highest state of development—the firmest faith, the most vivid hope, and the charity that never faileth. But this is not the only country that has had a land question to settle. Almost every nation in Europe has done for itself what England is now palled upon to do for Ireland. In fact, it is a necessary process in the transition from feudalism to constitutional self-government. Feudalism gave the land to a few whom it made princes and lords, having forcibly taken it from the many, whom it made subjects and serfs. The land is the natural basis of society. The Normans made it the artificial basis of a class. Society in nearly every other country has reverted back to its original foundations, and so remains firm and strong without dangerous rents or fissures. No doubt, the operation is difficult and critical. But what has been done once may be done again; and as it was England that kept Irish society so long rocking on its smaller end, it is her duty now to lend all her strength to help to seat it on its own broad foundations. Giving up the Viceroy's dreams that the glorious mission of Ireland was to be a kitchen garden, a dairy, a larder for England, we must come frankly to the conclusion that the national life of the Irish people, without distinction of creed or party, increases in vigour with their intelligence, and is now invincible. Let the imperial legislature put an end for ever to such an unnatural state of things—thus only can they secure the harmonious working and cordial Union of the two nations united together in one State—thus only can they insure for the landlords themselves all the power and all the influence that can be retained by them in consistency with the industrial rights and political freedom of the cultivators of the soil. These now complain of their abject dependence, and hopeless bondage, under grinding injustice. They are alleged to be full of discontent, which must grow with the intelligence and manhood of the people who writhe under the system. Their advocates affirm that their discontent must increase in volume and angry force every year, and that, owing to the connection of Ireland with the United States, it may at any time be suddenly swollen with the fury of a mountain torrent, deeply discoloured by a Republican element.