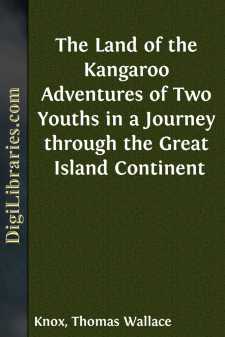 CHAPTER I. WEST COAST OF AFRICA—ADVENTURE IN THE SOUTH ATLANTIC OCEAN.

“We don’t want to stay long in this place.”

“The sooner we leave it, the better.”

“That is so,” said Harry; “I quite agree with you. I wonder how white men manage to live here at all.”

This conversation occurred at Bonny, a trading station on one of the mouths of the river Niger in Western Africa. In former times Bonny was a famous resort for slave traders, and great numbers of slaves were sent from that place to North and South America. In addition to slave trading, there was considerable dealing in ivory, palm oils, and other African products. Trade is not as prosperous at Bonny nowadays as it was in the slave-dealing times, but there is a fair amount of commerce and the commissions of the factors and agents are very large. Bonny stands in a region of swamps, and the climate exhales at all times of the year pestilential vapors which are not at all suited to the white man. Most of the white residents live on board old hulks which are moored to the bank of the river, and they find these hulks less unhealthy than houses off shore, for the reason that they are less exposed to the vapors of the ground.

The parties to the conversation just quoted were Dr. Whitney and his nephews, Ned and Harry; they had just arrived at Bonny, from a visit to Lake Chad and Timbuctoo, and had made a voyage down the Niger, which has been described in a volume entitled “In Wild Africa.”

One of the residents told Dr. Whitney that all the coast of the Bight of Benin, into which the Niger empties by its various mouths, was quite as unhealthy as Bonny. “We don’t expect anybody to live more than three or four years after taking up his residence here,” the gentleman remarked, “and very often one or two years are sufficient to carry him off. The climate is bad enough, but it isn’t the climate that is to blame for all the mortality, by any means. The great curse of the whole region is the habit of drinking. Everybody drinks, and drinks like a fish, too. When you call on anybody, the servants, without waiting for orders, bring a bottle of brandy, or whiskey, or something of the sort, and place it on the table between the host and the visitor. You are expected to drink, and the man who declines to do so is looked upon as a milksop. When one rises in the morning, his first call is for brandy and soda, and it is brandy, and whiskey, and champagne, or some other intoxicant, all the day long. The climate is bad enough without any help, but the drinking habit of the residents along the Bight of Benin is worse than the climate, and everybody knows it; but, somehow or other, everybody is reckless and continues to drink, knowing perfectly well what the result will be.”

Dr. Whitney had already made observations to the same effect, and remarked that he thought the west coast of Africa would be a good field of labor for an advocate of total abstinence....