The Land of The Blessed Virgin; Sketches and Impressions in Andalusia 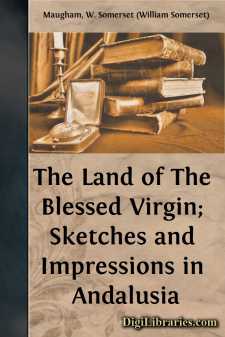 After one has left a country it is interesting to collect together the emotions it has given in an effort to define its particular character. And with Andalusia the attempt is especially fascinating, for it is a land of contrasts in which work upon one another, diversely, a hundred influences.

In London now, as I write, the rain of an English April pours down; the sky is leaden and cold, the houses in front of me are almost terrible in their monotonous greyness, the slate roofs are shining with the wet. Now and again people pass: a woman of the slums in a dirty apron, her head wrapped in a grey shawl; two girls in waterproofs, trim and alert notwithstanding the inclement weather, one with a music-case under her arm. A train arrives at an underground station and a score of city folk cross my window, sheltered behind their umbrellas; and two or three groups of workmen, silently, smoking short pipes: they walk with a dull, heavy tramp, with the gait of strong men who are very tired. Still the rain pours down unceasing.

And I think of Andalusia. My mind is suddenly ablaze with its sunshine, with its opulent colour, luminous and soft; I think of the cities, the white cities bathed in light; of the desolate wastes of sand, with their dwarf palms, the broom in flower. And in my ears I hear the twang of the guitar, the rhythmical clapping of hands and the castanets, as two girls dance in the sunlight on a holiday. I see the crowds going to the bull-fight, intensely living, many-coloured. And a thousand scents are wafted across my memory; I remember the cloudless nights, the silence of sleeping towns, and the silence of desert country; I remember old whitewashed taverns, and the perfumed wines of Malaga, of Jerez, and of Manzanilla. (The rain pours down without stay in oblique long lines, the light is quickly failing, the street is sad and very cheerless.) I feel on my shoulder the touch of dainty hands, of little hands with tapering fingers, and on my mouth the kisses of red lips, and I hear a joyous laugh. I remember the voice that bade me farewell that last night in Seville, and the gleam of dark eyes and dark hair at the foot of the stairs, as I looked back from the gate. 'Feliz viage, mi Inglesito.'

It was not love I felt for you, Rosarito; I wish it had been; but now far away, in the rain, I fancy, (oh no, not that I am at last in love,) but perhaps that I am just faintly enamoured—of your recollection.

But these are all Spanish things, and more than half one's impressions of Andalusia are connected with the Moors. Not only did they make exquisite buildings, they moulded a whole people to their likeness; the Andalusian character is rich with Oriental traits; the houses, the mode of life, the very atmosphere is Moorish rather than Christian; to this day the peasant at his plough sings the same quavering lament that sang the Moor. And it is to the invaders that Spain as a country owes the magnificence of its golden age: it was contact with them that gave the Spaniards cultivation; it was the conflict of seven hundred years that made them the best soldiers in Europe, and masters of half the world. The long struggle caused that tension of spirit which led to the adventurous descent upon America, teaching recklessness of life and the fascination of unknown dangers; and it caused their downfall as it had caused their rise, for the religious element in the racial war occasioned the most cruel bigotry that has existed on the face of the earth, so that the victors suffered as terribly as the vanquished....