The Land of Promise 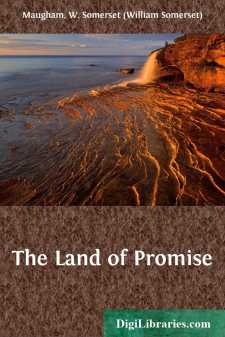 Nora opened her eyes to an unaccustomed consciousness of well-being. She was dimly aware that it had its origin in something deeper than mere physical comfort; but for the moment, in that state between sleeping and wakening, which still held her, it was enough to find that body and mind seemed rested.

Youth was reasserting itself. And it was only a short time ago that she had felt that never, never, could she by any possible chance feel young again. When one is young, one resents the reaction after any strain not purely physical as if it were a premature symptom of old age.

A ray of brilliant sunshine, which found its way through a gap in the drawn curtains, showed that it was long past the usual hour for rising. She smiled whimsically and closed her eyes once more. She remembered now that she was not in her own little room in the other wing of the house. The curtains proved that. How often in the ten years she had been with Miss Wickham had she begged that the staring white window blind, which decorated her one window, be replaced by curtains or even a blind of a dark tone that she might not be awakened by the first ray of light. She had even ventured to propose that the cost of such alterations be stopped out of her salary. Miss Wickham had refused to countenance any such innovation.

Three years before, when the offending blind had refused to hold together any longer, Nora had had a renewal of hope. But no! The new blind had been more glaringly white than its predecessor, which by contrast had taken on a grateful ivory tone in its old age. They had had one of their rare scenes at its advent. Nora had as a rule an admirable control of her naturally quick temper. But this had been too much.

"I might begin to understand your refusal if you ever entered my room. But since it would no more occur to you to do so than to visit the stables, I cannot see what possible difference it can make," Nora had stormed.

Miss Wickham's smile, which at the beginning of her companion's outburst had been faintly ironic, had broadened into the frankly humorous.

"Stated with your characteristic regard for exactitude, my dear Miss Marsh, it would never enter my head to do either. I prefer the white blind, however. As you know, I have no taste for explanations. We will let the matter rest there, if you please." Then she had added: "Some day, I strongly suspect, some man will amuse himself breaking that fiery temper of yours. I wish I were not so old, I think that I should enjoy knowing that he had succeeded." And the incident had ended, as always, with a few angry tears on Nora's part, as a preliminary to the inevitable game of bezique which finished off each happy day!

And this had been her life for ten years! A wave of pity, not for herself but for that young girl of eighteen who had once been herself, that proudly confident young creature who, when suddenly deprived of the protection of her only parent,—Nora's father had died when she was too young to remember him,—had so bravely faced the world, serene in the consciousness that the happiness which was her right was sure to be hers after a little waiting, dimmed her eyes for a moment. The dreams she had dreamed after she had received Miss Wickham's letter offering her the post of companion! She recalled how she had smiled to herself when the agent with whom she had filed her application congratulated her warmly on her good fortune in placing herself so promptly, and, by way of benediction, had wished that she might hold the position for many years. Many years indeed! That had been no part of her plan. Those nebulous plans had always been consistently rose-colored. It was impossible to remember them all now.

Sometimes the unknown Miss Wickham turned out to be a soft-hearted and sentimental old lady who was completely won by her young companion's charm and unmistakable air of good breeding. After a short time, she either adopted her, or, on dying, left her her entire fortune....