The Land of Contrasts A Briton's View of His American Kin 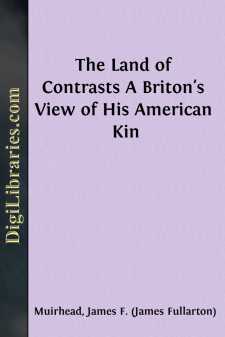 It is not everyone's business, nor would it be everyone's pleasure, to visit the United States of America. More, perhaps, than in any other country that I know of will what the traveller finds there depend on what he brings with him. Preconception will easily fatten into a perfect mammoth of realisation; but the open mind will add immeasurably to its garner of interests and experiences. It may be "but a colourless crowd of barren life to the dilettante—a poisonous field of clover to the cynic" (Martin Morris); but he to whom man is more than art will easily find his account in a visit to the American Republic. The man whose bent of mind is distinctly conservative, to whom innovation always suggests a presumption of deterioration, will probably be much more irritated than interested by a peregrination of the Union. The Englishman who is wedded to his own ideas, and whose conception of comfort and pleasure is bounded by the way they do things at home, may be goaded almost to madness by the gnat-stings of American readjustments—and all the more because he cannot adopt the explanation that they are the natural outcome of an alien blood and a foreign tongue. If he expects the same servility from his "inferiors" that he has been accustomed to at home, his relations with them will be a series of electric shocks; nay, his very expectation of it will exasperate the American and make him show his very worst side. The stately English dame must let her amusement outweigh her resentment if she is addressed as "grandma" by some genial railway conductor of the West; she may feel assured that no impertinence is intended.

The lover of scenery who expects to see a Jungfrau float into his ken before he has lost sight of a Mte. Rosa; the architect who expects to find the railway time-table punctuated at hourly intervals by a venerable monument of his art; the connoisseur who hopes to visit a Pitti Palace or a Dresden Picture Gallery in every large city; the student who counts on finding almost every foot of ground soaked with historic gore and every building hallowed by immemorial association; the sociologist who looks for different customs, costumes, and language at every stage of his journey;—each and all of these will do well to refrain his foot from the soil of the United States. On the other hand, the man who is interested in the workings of civilisation under totally new conditions; who can make allowances, and quickly and easily readjust his mental attitude; who has learned to let the new comforts of a new country make up, temporarily at least, for the loss of the old; who finds nothing alien to him that is human, and has a genuine love for mankind; who can appreciate the growth of general comfort at the expense of caste; who delights in promising experiments in politics, sociology, and education; who is not thrown off his balance by the shifting of the centre of gravity of honour and distinction; who, in a word, is not congealed by conventionality, but is ready to accept novelties on their merits,—he, unless I am very grievously mistaken, will find compensations in the United States that will go far to make up for Swiss Alp and Italian lake, for Gothic cathedral and Palladian palace, for historic charters and time-honoured tombs, for paintings by Raphael and statues by Phidias....