The Lady of the Ice A Novel 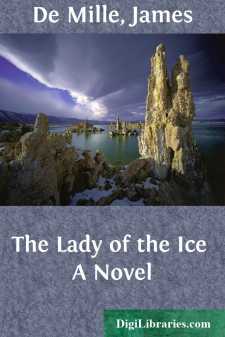 This is a story of Quebec. Quebec is a wonderful city.

I am given to understand that the ridge on which the city is built is Laurentian; and the river that flows past it is the same. On this (not the river, you know) are strata of schist, shale, old red sand-stone, trap, granite, clay, and mud. The upper stratum is ligneous, and is found to be very convenient for pavements.

It must not be supposed from this introduction that I am a geologist. I am not. I am a lieutenant in her Majesty's 129th Bobtails. The Bobtails are a gay and gallant set, and I have reason to know that we are well remembered in every place we have been quartered.

Into the vortex of Quebeccian society I threw myself with all the generous ardor of youth, and was keenly alive to those charms which the Canadian ladies possess and use so fatally. It is a singular fact, for which I will not attempt to account, that in Quebeccian society one comes in contact with ladies only. Where the male element is I never could imagine. I never saw a civilian. There are no young men in Quebec; if there are any, we officers are not aware of it. I've often been anxious to see one, but never could make it out. Now, of these Canadian ladies I cannot trust myself to speak with calmness. An allusion to them will of itself be eloquent to every brother officer. I will simply remark that, at a time when the tendencies of the Canadians generally are a subject of interest both in England and America, and when it is a matter of doubt whether they lean to annexation or British connection, their fair young daughters show an unmistakable tendency not to one, but to both, and make two apparently incompatible principles really inseparable.

You must understand that this is my roundabout way of hinting that the unmarried British officer who goes to Canada generally finds his destiny tenderly folding itself around a Canadian bride. It is the common lot. Some of these take their wives with them around the world, but many more retire from the service, buy farms, and practise love in a cottage. Thus the fair and loyal Canadiennes are responsible for the loss of many and many a gallant officer to her majesty's service. Throughout these colonial stations there has been, and there will be, a fearful depletion, among the numbers of these brave but too impressible men. I make this statement solemnly, as a mournful fact. I have nothing to say against it; and it is not for one who has had an experience like mine to hint at a remedy. But to my story:

Every one who was in Quebec during the winter of 18—, if he went into society at all, must have been struck by the appearance of a young Bobtail officer, who was a joyous and a welcome guest at every house where it was desirable to be. Tall, straight as an arrow, and singularly well-proportioned, the picturesque costume of the 129th Bobtails could add but little to the effect already produced by so martial a figure. His face was whiskerless; his eyes gray; his cheek-bones a little higher than the average; his hair auburn; his nose not Grecian—or Roman—but still impressive: his air one of quiet dignity, mingled with youthful joyance and mirthfulness....