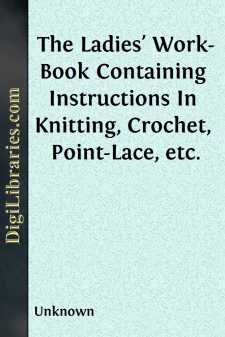 CASTING ON WITH ONE NEEDLE

The first process in knitting is known by the term CASTING ON. There are two ways of doing this: with one needle, and with two. Our first diagram represents the former process. Take the thread between the second and third fingers of the left hand, leaving an end of about a yard for every hundred stitches; pass it round the thumb of that hand, giving it a twist, so as to form a loop. Take a knitting-needle in the right hand, insert the point in the loop, and pass the thread from the ball round the needle; then bend the point of the needle through the loop, which tighten, and one stitch will be complete. Continue to make loops over the thumb, with the end of thread, and knit them with that from the ball until the proper number is cast on.

TO CAST ON WITH TWO NEEDLES (generally called the Spanish method), begin by making a loop on the end of the thread, into which slip the point of one needle, holding it in the left hand. Take the other needle in the right hand, and slip its point into the same loop, bring the thread round the point of this needle, and bend the needle towards you, so that the thread forms a loop on it. Slip that also on the left needle, without withdrawing it from the right. Put the thread round the right again, and repeat the process.

TO CAST ON WITH TWO NEEDLES.

PLAIN KNITTING.—After all the stitches are cast on, hold the needle containing them in the left hand. Pass the thread round the little finger of the right hand, under the second and third, and above the point of the first. Then take the other needle in the right hand, slip the point in the first stitch, and put the thread round it; bring forward the point of the right-hand needle, so that the thread forms a loop on it. Slip the end of the left-hand needle out of the stitch, and a new stitch is knitted.

GERMAN MANNER.—The thread, instead of being held by the fingers of the right hand, is passed over and under those of the left. The process otherwise is exactly the same.

When knitted and purled stitches occur in the same row, the thread must be brought forward before a purled stitch, and taken back before a knitted one.

TO MAKE A STITCH. Bring the thread in front, as if for a purled stitch, so that when you knit one the thread will pass over the needle, and will make a hole in the following row. This diagram shows the manner of making three stitches, and any other number could be made, by putting the thread round a proportionate number of times. In the engraving it will be seen that the thread is put twice entirely round the needle; and then brought forward, so that the next knitted stitch will take it over a third time....