The Kitchen Cat and Other Stories 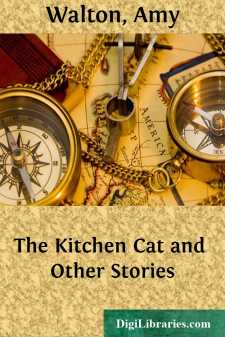 CHAPTER I The Visitor from the Cellar

The whole house in London was dull and gloomy, its lofty rooms and staircases were filled with a sort of misty twilight all day, and the sun very seldom looked in at its windows. Ruth Lorimer thought, however, that the very dullest room of all was the nursery, in which she had to pass so much of her time. It was so high up that the people and carts and horses in the street below looked like toys. She could not even see these properly, because there were iron bars to prevent her from stretching her head out too far, so that all she could do was to look straight across to the row of tall houses opposite, or up at the sky between the chimney-pots. How she longed for something different to look at!

The houses always looked the same, and though the sky changed sometimes, it was often of a dirty grey colour, and then Ruth gave a little sigh and looked back from the window-seat where she was kneeling, into the nursery, for something to amuse her. It was full of all sorts of toys—dolls, and dolls' houses elegantly furnished, pictures and books and many pretty things; but in spite of all these she often found nothing to please her, for what she wanted more than anything else was a companion of her own age, and she had no brothers or sisters.

The dolls, however much she pretended, were never glad, or sorry, or happy, or miserable—they could not answer her when she talked to them, and their beautiful bright eyes had a hard unfeeling look which became very tiring, for it never changed.

There was certainly Nurse Smith. She was alive and real enough; there was no necessity to "pretend" anything about her. She was always there, sitting upright and flat-backed beside her work-basket, frowning a little, not because she was cross, but because she was rather near-sighted. She had come when Ruth was quite a baby, after Mrs. Lorimer's death, and Aunt Clarkson often spoke of her as "a treasure". However that might be, she was not an amusing companion; though she did her best to answer all Ruth's questions, and was always careful of her comfort, and particular about her being neatly dressed.

Perhaps it was not her fault that she did not understand games, and was quite unable to act the part of any other character than her own. If she did make the attempt, she failed so miserably that Ruth had to tell her what to say, which made it so flat and uninteresting that she found it better to play alone. But she often became weary of this; and there were times when she was tired of her toys, and tired of Nurse Smith, and did not know what in the world to do with herself.

Each day passed much in the same way. Ruth's governess came to teach her for an hour every morning, and then after her early dinner there was a walk with Nurse, generally in one direction. And after tea it was time to go and see her father—quite a long journey, through the silent house, down the long stairs to the dining-room where he sat alone at his dessert.

Ruth could not remember her mother, and she saw so little of her father that he seemed almost a stranger to her....