The King's Daughter and Other Stories for Girls 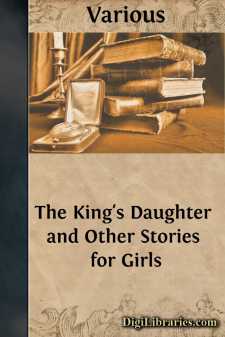 "I wish I were a princess!"

Emma stood with the dust-brush in her hand, pausing on her way upstairs to her own pretty little white room, which she was required to put in order every day.

"Why, my child?" asked her mother.

"Because then I would never have to sweep and dust and make beds, but would have plenty of servants to do these things for me."

"That is a very foolish wish, my daughter, but even if you were a princess, I think you would find it best to learn how to do these things, so that you could do them in case of necessity."

"But it is never necessary for princesses to work."

"There my little girl proves her ignorance. If she will come to me after her work is done, I will show her a picture."

The little bedroom was at length put to rights, and Emma came to her mother, reminding her of her promise about the picture.

"What do you see, my child?" her mother asked, as she laid the picture before her daughter.

"I see a young girl with her dress fastened up, an apron on, and a broom in her hand."

"Can you tell me what kind of place she is in?"

"I do not know. There are walls and arches of stone, and a bare stone floor. I don't think it can be a pleasant place."

"Please tell me about her."

"Many years ago the king of France was Louis XVI, and his wife was Marie Antoinette. They were not a wicked king and queen, but they were thoughtless and fond of pleasure.

"They forgot that it was their duty to look after the good of their people; so they spent money extravagantly in their own pleasures, while the whole nation was suffering.

"The people became dissatisfied; and when, finally, Louis and Marie Antoinette saw the mistake they had been making, and tried to change their conduct, it was too late.

"The people, urged on by their leaders, learned to hate their king and queen. They were taken, with their two children, and shut up in a prison called the Temple.

"There were dreadful times in France then, and every one who was suspected of being friendly to the king and his family was sent to prison and to the guillotine. The prisoners in the Temple passed the time as best they could.

"The king gave lessons to his son and daughter every day, or read aloud to them all, while Marie Antoinette, Madame Elizabeth, and the young Marie Theresa sewed.

"After awhile the angry people took away the king and beheaded him. And shortly after the little son was separated from his mother, sister, and aunt, and shut up by himself in the charge of a cruel jailor.

"Next it was Marie Antoinette's turn to ascend the scaffold, which she did October 16, 1793. Her daughter, Marie Theresa, was then left alone with her aunt, the Madame Elizabeth.

"But it was not long she was allowed this companionship. Madame Elizabeth was taken away and beheaded, and then the poor young girl of sixteen was left entirely by herself in a dismal prison, guarded and waited on by brutal soldiers.