The Kings and Queens of England with Other Poems 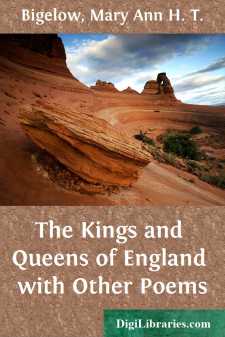 The Kings and Queens of England, From the Battle of Hastings or the Norman Conquest, to the Present Reign, Inclusive.

First, William the Norman lays claim to the crown

And retains it till death; then follows his son

The red headed William, whose life is cut short

By a shot from his friend, when hunting for sport.

As Henry the first, of the great English nation.

Next Stephen, a kinsman gets the crown by his might,

But no one pretends to say he had a right.

Then comes Hal the second, who cuts a great figure

The Lion-hearted Richard, first of that name,

Succeeded his father in power and in fame;

He joined the Crusade to a far distant land

But his life was cut short by a murderous hand.

Next comes the cruel and cowardly John,

From whose hand, reluctant, Magna Charta was won.

Then his son Henry third, deny it who can?

Though unfit for a King, was yet a good man,

And his reign though a long one of fifty-six years

Was full of perplexities, sorrows, and fears.

His son Edward first next governs the nation,

Much respected and feared, in holding that station.

The Principality of Wales was annexed in his reign,

And his son Edward second, first Prince of that name.

But what shall I say of King Edward the third,

The most remarkable reign, that yet had occurred;

Fire arms in the war, were first used in his reign,

And the battle of Cressy of great note and fame,

To their introduction has the right to lay claim.

The knights of the Garter, first made in his reign

In honor it seems of a fair English dame,

The Duchess of Salisbury to whom it is said,

From Edward peculiar attentions were paid.

Of Richard the second we have little to say,

And take up the fourth Henry, the next on our way,

Who reigned fourteen years, when death cut him down

And left his good Kingdom to Henry his son;

But ere nine years had past, the fifth Henry was borne

To the region of darkness from whence none return.

The next reign is full of commotion and strife,

And Henry the sixth is seen flying for life;

For though King of England, we cannot but see

He’s but the shadow of a king—that should be;

And during the thirty-nine years that he reigned

His crown and his sceptre were feebly retained.

It was in this reign on her mission intent,

That Joan of Arc to the battle field went:

The French troops were elated, the English dismayed

At the wonderful victories achieved by her aid;

At length fortune turns, and ’tis needless to tell

Of the fate of this maiden—it is all known too well.

Of Edward the fourth it seems proper to say

That he fancied Dame Shore, when wed to Bess Gray.

But the fate of Jane Shore, should be warning to all

Who from love, or ambition, are tempted to fall.

When Edward the fourth departed this earth,

He left two little sons, both Royal by birth;

But ere three years had pass’d, both met with their doom,

By a most cruel uncle, cut down in their bloom

Of youth, love, and beauty, and laid in the tomb.

King Edward the fifth was the eldest one’s name,

Though never permitted by his uncle to reign....