The Kingdom of Love 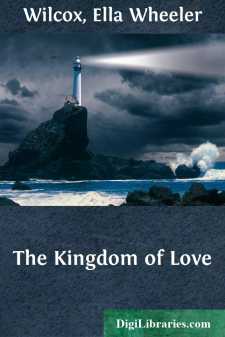 THE KINGDOM OF LOVE

In the dawn of the day when the sea and the earth   Reflected the sunrise above,I set forth with a heart full of courage and mirth   To seek for the Kingdom of Love.I asked of a Poet I met on the way   Which cross-road would lead me aright;And he said “Follow me, and ere long you shall see   Its glittering turrets of light.”

And soon in the distance a city shone fair.   “Look yonder,” he said; “How it gleams!”But alas! for the hopes that were doomed to despair,   It was only the “Kingdom of Dreams.”Then the next man I asked was a gay Cavalier,   And he said: “Follow me, follow me”;And with laughter and song we went speeding along   By the shores of Life’s beautiful sea.

Then we came to a valley more tropical far   Than the wonderful vale of Cashmere,And I saw from a bower a face like a flower   Smile out on the gay Cavalier;And he said: “We have come to humanity’s goal:   Here love and delight are intense.”But alas and alas! for the hopes of my soul—   It was only the “Kingdom of Sense.”

As I journeyed more slowly I met on the road   A coach with retainers behind;And they said: “Follow me, for our Lady’s abode   Belongs in that realm, you will find.”’Twas a grand dame of fashion, a newly-made bride,   I followed, encouraged and bold;But my hopes died away like the last gleams of day,   For we came to the “Kingdom of Gold.”

At the door of a cottage I asked a fair maid.   “I have heard of that realm,” she replied;“But my feet never roam from the ‘Kingdom of Home,’   So I know not the way,” and she sighed.I looked on the cottage; how restful it seemed!   And the maid was as fair as a dove.Great light glorified my soul as I cried:   “Why, Home is the ‘Kingdom of Love’!”

The sun rode high in a cloudless sky   Of a perfect summer morn.She stood and gazed out into the street,   And wondered why she was born.On the topmost branch of a maple-tree   That close by the window grew,A robin called to his mate enthralled:   “I love but you, but you, but you.”

She saw again that dusty road   Whence he came riding down;She smelled once more the flower she wore   In the breast of her simple gown.Out on the new-mown meadow she heard   Two blue-jays quarrel and fret,And the warning cry of a Phoebe bird   “More wet, more wet, more wet.”

With a blithe “Hello” to the men below   Who were spreading the new-mown hay,The rider drew rein at her window-pane—   How it all came back to-day!How young she was, and how fair she was;   What innocence crowned her brow...!