The King Nobody Wanted 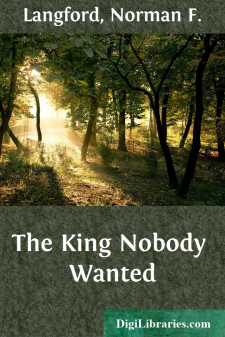 In a very real and interesting way, The King Nobody Wanted tells the story of Jesus. Where the actual words of the Bible are used, they are from the King James Version. But the greater part of the story is told in the words of every day.

Since you will certainly want to look up these stories in your own Bible, the references are given on pages 191 and 192. You will discover that often more than one Gospel tells the same story about Jesus, but in a slightly different way. In The King Nobody Wanted, the stories from the Gospels have been put together so that there is just one story for you to read and understand and enjoy.

"When will he come?" was the question they were always asking one another. "Will he come in five years? next year? Or is he already on his way?"

They had one king already. His name was Herod the Great. But Herod was not the kind of king they wanted. Herod was hard and cruel. He poisoned and beheaded those who made him angry. He was not a Jew by birth. The Messiah, when he came, would be a good king. He would be a Jew himself, and a friend to all the Jewish people. One of the prophets said he would be like the shepherds of Palestine, who watched their sheep night and day, and carried the small lambs in their arms.

But the most important thing about the Messiah was that he would drive Caesar and his armies out of the country. Caesar! How they hated his very name! For Caesar was the emperor of the Romans. Some years before, the Romans had occupied the country and begun to rule it. Herod was still king of the Jews, but now he took his orders from Caesar. Everybody had to take orders from Caesar. The Jews were not a free people any more.

"It used to be so different," the older people sighed, "before the Romans came."

Everywhere in Palestine Roman armies went marching. Their shields flashed in the sunlight, and when they were on the march they carried golden eagles which stood for Caesar's power.

The Romans tried to rule the country well. They said that everybody would get justice and fair play. But the Jews could not see the fairness in having to pay taxes to a foreign king who did not even worship God. They did not like to see Roman soldiers whipping people with long leather whips called scourges, into which bits of glass and lead and iron were fastened to make them bite more deeply into some poor Jew's back. They were sick at heart when the Romans began to punish criminals by nailing them up by their hands and feet to big wooden crosses, and leaving them to hang there until they died.

Well, the Messiah would take care of the Romans. He would gather an army from east and west and north and south....