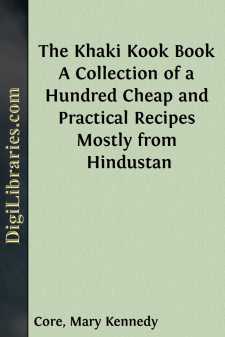 WHY THIS LITTLE BOOK.

About ten years ago the idea of writing a little cook book had its birth. We were in Almora that summer. Almora is a station far up in the Himalayas, a clean little bazaar nestles at the foot of enclosing mountains. Dotting the deodar-covered slopes of these mountains are the picturesque bungalows of the European residents, while towering above and over all are the glistening peaks of the eternal snows.

We love to think of this particular summer, for Lilavate Singh was with us. The thought of her always brings help and inspiration.

One day she prepared for the crowd of us a tiffin of delicious Hindustani food. That afternoon while we were sitting under the shade and fragrance of the deodar trees, we praised the tiffin. Before we knew it we were planning a cook book. It was to be a joint affair of Hindustani and English dishes, and Miss Singh was to be responsible for the Hindustani part of it. Our enthusiasm grew. For three or four days we talked of nothing else. We experimented, we planned; we dreamed, we wrote. But alas! other things soon thrust themselves upon us, and our unfinished cook book was pigeon-holed for years and years.

And it is not now what it would have been if finished then.

Many of the recipes, however, are those that Miss Singh gave us then. Some of them she might not recognize, for they have become quite Americanized, but they are hers nevertheless, and I hope that you will not only try them and enjoy them, but that they will help you to solve some of the problems of living and giving which are confronting us all these days.

Desiring to know what was for why, and what was for stomach one day, the lady called the ayah to her and sought the interpretation thereof.

You may smile at this and feel sorry for the poor benighted Hindu, who has such a low ideal of the meaning of life, but after all we cannot ignore the fact that we must eat, and that much as we dislike to acknowledge it, we are compelled to think a great deal about filling our stomachs. This is especially true these days, when prices have soared and soared and taken along with them, far out of the reach of many of us, certain articles of food which we heretofore have always felt were quite necessary to us.

The missionary on furlough is naturally regarded as a bureau of information regarding the land where he has lived and worked....