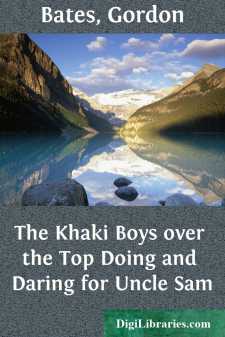 CHAPTER I BLOWN BACK

"That noise. Sounds like a party coming along the communication trench!"

The talk was in tense whispers, and the listening was now of the same tenseness. Two khaki-clad Sammies stood on the alert in the muddy ditch, dignified by the title, "trench," and tried to pierce the darkness that was like a pall of black velvet over everything.

"Hear it?" inquired he who had first spoken.

"I somedings hears, too," spoke a guttural voice, with a foreign accent. "Might not it perhaps be—"

"Cut that talk, Iggy!" sharply commanded the first speaker. "Do you want the lieutenant dropping in on us!" And Corporal Robert Dalton cautiously moved nearer his fellow non-com., Sergeant Franz Schnitzel.

"Yes, not so loud," advised Schnitzel, who, in spite of his Teutonic name, was a thorough American, speaking with no trace of German accent. "Don't forget that the Boches may have listening parties out right in front of this trench, even though they may have information that we're going to rush 'em just before dawn."

"But what is that noise?" went on Bob. "It sounds like the relief coming, and yet we can't be going to be relieved so near the zero hour. It's impossible."

"Him one big word is," sighed Iggy, trying to adjust his Polish tongue to the strange language called English. "But thinks me nothing is like him in dis war!"

"Nothing is like what?" asked Schnitzel, the talk now being reduced to whispers on the part of all three.

"Him wot you said—repossible," said the Polish lad.

"Hush!" quickly exclaimed Bob, or Dal, as he was variously called by his comrades. "There is some one coming along the trench. If it's the Boches—"

This was enough to cause all three to grip their rifles more tightly. The sound of advancing footsteps, cautious as they were, was now more audible. Then came a whispered, but sharp:

"Our lieut's on the job!" commented Bob.

Tensely the three who stood shoulder to shoulder in the darkness of the foremost trench, waiting, listened for the answer. It came, also in a whisper, but it carried to their ears.

"Sergeant Blaise and Sergeant Barlow, ordered to report here to you, sir."

"Cheese it!" cautioned Dal, for the Polish lad, in his enthusiasm, had spoken above a whisper, and even slight sounds carried far on this dark, still night.

"Advance, Sergeant Blaise to be recognized," came the order from the sentry, evidently acting on advice from the lieutenant in command of this part of the American trench.

There was a period of silent waiting on the part of the three who stood so close together, and then they heard their immediate commanding officer say:

"Pass on. You'll find your friends just beyond here."

A moment later the two newcomers were grasping hands in the dark with the three waiting ones.

"The five Brothers are united again," said Roger Barlow in a low voice.

"Sooner than I expected," commented Jimmy Blaise. "Now we can go over the top together."

"Over the top, may we all go together, in the wind and the rain or in damp, foggy weather," was Bob Dalton's contribution....