The Kama Sutra of Vatsyayana Translated From the Sanscrit in Seven Parts With Preface, Introduction and Concluding Remarks 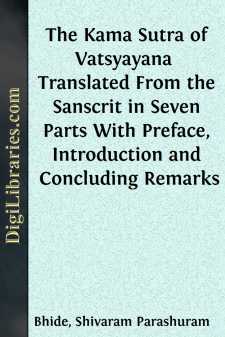 Add to My Favorites
Published: 9 years ago
Downloads: 155
Rating: (0 Votes)

In the literature of all countries there will be found a certain number of works treating especially of love. Everywhere the subject is dealt with differently, and from various points of view. In the present publication it is proposed to give a complete translation of what is considered the standard work on love in literature, and which is called the 'Vatsyayana Kama Sutra,' or Aphorisms on Love, by Vatsyayana.

Besides the treatise of Vatsyayana the following works on the same subject are procurable in India:—

The author of the 'Secrets of Love' (No. 1) was a poet named Kukkoka. He composed his work to please one Venudutta, who was perhaps a king. When writing his own name at the end of each chapter he calls himself "Siddha patiya pandita," i.e., an ingenious man among learned men. The work was translated into Hindi years ago, and in this the author's name was written as Koka. And as the same name crept into all the translations into other languages in India, the book became generally known, and the subject was popularly called Koka Shastra, or doctrines of Koka, which is identical with the Kama Shastra, or doctrines of love, and the words Koka Shastra and Kama Shastra are used indiscriminately.

The work contains nearly eight hundred verses, and is divided into ten chapters, which are called Pachivedas. Some of the things treated of in this work are not to be found in the Vatsyayana, such as the four classes of women, viz., the Padmini, Chitrini, Shankini and Hastini, as also the enumeration of the days and hours on which the women of the different classes become subject to love. The author adds that he wrote these things from the opinions of Gonikaputra and Nandikeshwara, both of whom are mentioned by Vatsyayana, but their works are not now extant. It is difficult to give any approximate idea as to the year in which the work was composed. It is only to be presumed that it was written after that of Vatsyayana, and previous to the other works on this subject that are still extant. Vatsyayana gives the names of ten authors on the subject, all of whose works he had consulted, but none of which are extant, and does not mention this one. This would tend to show that Kukkoka wrote after Vatsya, otherwise Vatsya would assuredly have mentioned him as an author in this branch of literature along with the others.

The author of the 'Five Arrows' (No. 2 in the list) was one Jyotirisha. He is called the chief ornament of poets, the treasure of the sixty-four arts, and the best teacher of the rules of music....