The Junior Classics - Volume 7 Stories of Courage and Heroism 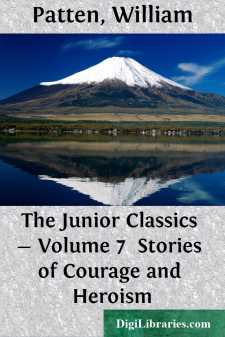 During the time when Pericles was at the head of the state at Athens he spared no pains and no money to make the city beautiful. He himself was a lover and patron of the arts, and he was determined that Athens should become the very centre of art and refinement, and that she should have splendid public buildings and splendid sculptures and paintings. So he gathered round him all the great sculptors and painters, and set them to work to carry out his ambitious plans; and some of you know that the "Age of Pericles" is still spoken of as an age in which art advanced towards and attained to a marvellous perfection.

On the Acropolis, or Citadel of Athens, rose the magnificent Temple of Athena, called the Parthenon, built under the direction of Phidias, the most celebrated sculptor of that time, who adorned it with many of his works, and especially with the huge statue of Athena in ivory, forty-seven feet in height. The Acropolis was also enriched with another figure of Athena in bronze—also the work of Phidias.

The statue was called the "Athena Promachus"; that is "The Defender." If you turn to your Grecian History you will find a full description of the Parthenon and the other temples of the gods and heroes and guardian deities of the city. But I want to tell you something about Phidias himself, and little Iris, an image-maker's daughter.

It was in the year 450 B.C., in the early summer, and Phidias, who had been working all the day, strolled quietly along the streets of Athens.

As he passed by the Agora (or market-place), he chanced to look up, and he saw a young girl of about thirteen years sitting near him. Her face was of the purest beauty; her head was gracefully poised on her shoulders; her expression was sadness itself. She looked poor and in distress. She came forward and begged for help; and there was something in her manner, as well as in her face, which made Phidias pause and listen to her.

"My father lies ill," she said plaintively, "and he cannot do his work, and so we can get no food: nothing to make him well and strong again. If I could only do his work for him I should not mind; and then I should not beg. He does not know I came out to beg—he would never forgive me; but I could not bear to see him lying there without food."

"And who is your father?" asked Phidias kindly.

"His name is Aristæus," she said, "and he is a maker of images—little clay figures of gods and goddesses and heroes. Indeed, he is clever; and I am sure you would praise the 'Hercules' he finished before he was taken ill."

"Take me to your home," Phidias said to the girl; as they passed on together he asked her many questions about the image-maker. She was proud of her father; and Phidias smiled to himself when he heard her speak of this father as though he were the greatest sculptor in Athens. He liked to hear her speak so enthusiastically.

"Is it not wonderful," she said, "to take the clay and work in into forms? Not everyone could do that—could you do it?"

"Perhaps not so well as your father," he answered kindly. "Still,I can do it."

"Perhaps you would help father?" she said eagerly. "Ah! but I ought not to have said that."

"Perhaps I can help him," replied Phidias good-naturedly. "Anyway, take me to him."

She led him through some side streets into the poorest parts of the city, and stopped before a little window, where a few roughly-wrought images and vases were exposed to view. She beckoned to him to follow her, and opening the door, crept gently into a room which served as their workshop and dwelling-place. Phidias saw a man stretched out on a couch at the farther end of the room, near a bench where many images and pots of all sorts lay unfinished....