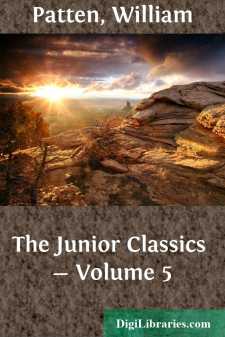 Consciously or unconsciously we are influenced by the characters we admire. A book that exerts a deep as well as a wide influence must produce changes in the reader's way of thinking, and excite him to activity; the world for him can never be quite the same that it was before. Such books have an important part in moulding the character of a people.

It is because the books represented in this volume have been doing just that for many years that they have become so prized. In the characters of Crusoe, Gulliver and Christian, to mention only three, English-speaking people recognize pictures of the independent, self-reliant men, often self-educated (at least in many important particulars), adventurous and daring by nature, dependent upon themselves and the use of their faculties for happiness, who made England great among nations, and wrote the Constitution of the United States.

With the passage of time the books have lost nothing of the charmand fascination which they have ever possessed for young and old."Was there ever yet anything written by mere man," said Dr. SamuelJohnson, "that was wished longer by its readers, exceptingRobinson Crusoe, Pilgrim's Progress, and Don Quixote?"

At this time, when the subject of vocational training is receiving so much attention, and public school instruction is being criticized because, its critics say, it does not prepare boys and girls to meet the demands which life makes upon them, it is interesting to read what was said almost a hundred years ago by a man whose influence on education has been both deep and lasting in character.

They have just been celebrating in France the centenary of Jean Jacques Rousseau. In the early chapters of "Emile" we read: "Since we must have books, there is one which, to my mind, furnishes the finest treatise on Education according to nature. My Emile shall read this book before any other. It shall for a long time be his entire library. It shall be a test for all we meet during our progress toward a ripened judgment, and so long as our taste is unspoiled we shall enjoy reading it. What wonderful book is this? Aristotle? Pliny? Buffon? No; it is Robinson Crusoe."

There is no more useful talent than the ability to think and speak (or write) clearly and simply, no matter what our vocation in life. None know better how difficult it is to find writers with a good narrative style than those editors whose training and experience have made them realize its value and importance. If we examine the experience of those who, in comparatively recent days, have stirred men with the force and directness of their simple speech, as Lincoln, for example, we find that as boys they were great readers of the Bible, and Robinson Crusoe, Gulliver's Travels, Shakespeare, Bunyan, and Scott. As examples of English these books stand preeminent.

Lord Brougham relates that one of his friends, a professor in a university, consulted one of the ablest historians of his time as to what would be the best discipline for acquiring a good narrative style, as a prelude to writing a book of travels through Asia. The advice given him was to read Robinson Crusoe carefully. When the professor expressed astonishment, supposing it to be a jest, the historian said he was quite serious, but that if Robinson Crusoe would not help him, for any reason, he recommended Gulliver's Travels....