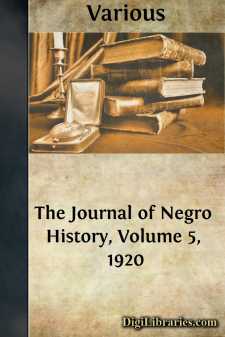 THE NEGRO IN EDUCATION

In the early history of America there were three types of settlements—the French, Spanish, and English. In the French Provinces the teachings of the "Code Noir" made it incumbent upon the masters to teach the slaves, at least to read, in order, of course, that they might read the Bible; and in the Spanish districts the Latin custom of miscegenation prevented the rise of objections to the teaching of slaves, in case there should be any who cared to instruct the Negroes. In the English Provinces, on the other hand, since teaching the slaves would probably result in their becoming Christians, the colonists naturally were strenuous in their efforts to prevent any enlightenment of the blacks, due to the existence of an unwritten law to the effect that no Christian might be held a slave. Many planters forbade the teaching of their slaves, until finally the Bishop of London settled the difficulty by issuing a formal declaration in which he stated that conversion did not work manumission.

The rudimentary education of Negroes was one of the first claims on pioneer Christian teachers. Although the Negro Year Book for 1914-15 makes note of a public school for Indians and Negroes established in 1620, according to Brawley and Du Bois, the first schools to be established were private institutions. In New York City in 1704 a school was opened for Negroes and Indians by Elias Neau and in 1750 Anthony Benezet established an evening school for the blacks in Philadelphia. The Society for the Propagation of the Gospel established in Charleston in 1744 a mission school, in which two Negroes were employed to instruct their fellowmen. The free Negroes in Charleston established a school in 1774 and those in Boston started a school in 1798. In 1764 the editor of a paper in Williamsburg, Virginia, opened a school for Negroes and in 1800 a schoolhouse and 350 acres of ground were left by the will of Robert Pleasants to be used for the benefit of Negro children. About this same time in Newark, New Jersey, the Kosciusko School was established by means of a sum amounting to $13,000 left by Kosciusko for the education of the Negroes. In the Middle West private schools had been organized by manumitted Negroes.

St. Frances Academy, established in Baltimore in 1829, by The Colored Woman's Society, was the first school for colored girls. An institute for Negro children was established in 1837 in Cheyney, Pennsylvania, with the $10,000 left by Richard Humphries. By 1838 there were thirteen private schools in Philadelphia for the education of the Negro and in 1849 Avery College was established in Allegheny. Many of the schools were organized by church societies. The African Methodist Episcopal Church purchased in 1844 120 acres of land in Ohio upon which was opened the Union Seminary in 1847. This church later in co-operation with the Methodist Episcopal Church, North, established Wilberforce University in Ohio in 1856. Oberlin College in Ohio was opened in 1833 and Ashmun Institute, which later became Lincoln University, was established in 1854 in Pennsylvania....