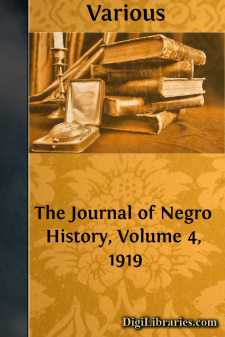 PRIMITIVE LAW AND THE NEGRO

The psychology of large bodies of men is a surprisingly difficult topic and it is often true that we are inclined to seek the explanation of phenomena in too recent a period of human development. The truth seems to be that ideas prevail longer than customs, habits of dress or the ordinary economic processes of the community, and the ideas are the controlling factors. The attitude of the white man in this country toward the Negro is the fact perhaps of most consequence in the Negro problem. Why is it that still there lingers a certain unwillingness, one can hardly say more, in the minds of the best people to accept literally the platform of the Civil War? Why were the East St. Louis riots possible? I am afraid that a good many of the Negro race feel that there is a distinct personal prejudice or antipathy which can be reached or ought to be reached by logic, by reason, by an appeal to the principles of Christianity and of democracy. For myself I have always felt that if the premises of Christianity were valid at all, they placed the Negro upon precisely the same plane as the white man; that if the premises of democracy were true for the white man, they were true for the black. There should be no artificial distinction created by law, and what is much more to the purpose, by custom simply because the one man has a skin different in hue than the other. Nor should the law, once having been made equal, be nullified by a lack of observance on the part of the whites nor be abrogated by tacit agreements or by further legislation subtly worded so as to avoid constitutional requirements. Each man and woman should be tested by his qualities and achievements and valued for what he is. I am sure no Negro asks for more, and yet I am afraid it is true, as many have complained, that in considerable sections of this country he receives far less.

I have long believed that we are concerned in this case with no reasoned choice and with no explainable act, but with an unconscious impulse, a subconscious impulse possibly, with an illogical, unreasonable but powerful and in-explainable reaction of which the white man himself is scarcely conscious and yet which he feels to be stronger than all the impulses created in him by reason and logic. What is its origin? Is there such a force? I think most will agree there is such an instinctive aversion or dislike.

I am inclined to carry it back into the beginnings of the race, back to the period of pre-historic law and to that psychological origin which antedates the records of history, in the strict sense, to that part of racial history indeed where men commonly act rather than write. The idea of prehistoric law is that obligation exists only between people of the same blood. Originally, charitable and decent conduct was expected only of people of the same family. Even though the family was by fact or fiction extended to include some hundreds or even thousands of people, the fact was still true. The law which bound a man limited his good conduct to a relatively few people. Outside the blood kin he was not bound. He must not steal from his relatives, but if he stole from another clan, his relatives deemed it virtue. If he committed murder, he should be punished within his clan, but protected, if possible, by his clan, if he murdered someone outside it. The blood kin became the definite limitation of the ideas of right and responsibility. This was true between whites. All whites were not members of any one man's blood kin.

Palpably more true was this distinction between the Negro and the white man. The Negro could not by any fiction be represented as one of the blood kin. The Romans extended the legal citizenship to cover all white men in their dominions. It was the fictitious tie of the blood kin, but its plausibility was due to the fact that they were all white. I do not remember to have seen any proof that the Negro inhabitants of the Roman African colonies were considered Roman citizens. This is one of the oldest psychological lines in human history; the rights which a man must concede to another are limited by the relationship of blood. Prima facie there could be no blood relationship between the Negro and the white man. There could therefore be no obligation on the white man's part to the Negro in prehistoric law. This notion has, I think, endured in many ways down to the present day as a subconscious, unconscious factor behind many very vital notions and ideas....