The Johnstown Horror!!! or, Valley of Death, being A Complete and Thrilling Account of the Awful Floods and Their Appalling Ruin 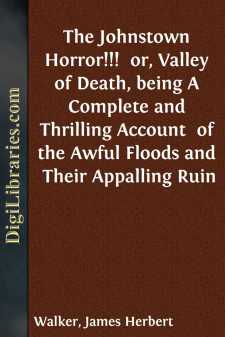 CHAPTER I. The Appalling News.

On the advent of Summer, June 1st, the country was horror-stricken by the announcement that a terrible calamity had overtaken the inhabitants of Johnstown, and the neighboring villages. Instantly the whole land was stirred by the startling news of this great disaster. Its appalling magnitude, its dreadful suddenness, its scenes of terror and agony, the fate of thousands swept to instant death by a flood as frightful as that of the cataract of Niagara, awakened the profoundest horror. No calamity in the history of modern times has so appalled the civilized world.

The following graphic pen-picture will give the reader an accurate idea of the picturesque scene of the disaster:

Away up in the misty crags of the Alleghanies some tiny rills trickle and gurgle from a cleft in the mossy rocks. The drippling waters, timid perhaps in the bleak and lonely fastness of the heights, hug and coddle one another until they flash into a limpid pool. A score of rivulets from all the mountain side babble hither over rocky beds to join their companions. Thence in rippling current they purl and tinkle down the gentle slopes, through bosky nooks sweet with the odors of fir tree and pine, over meads dappled with the scarlet snap-dragon and purple heath buds, now pausing for a moment to idle with a wood encircled lake, now tumbling in opalescent cascade over a mossy lurch, and then on again in cheerful, hurried course down the Appalachian valley.

None stays their way. Here and there perhaps some thrifty Pennsylvania Dutchman coaxes the saucy stream to turn his mill-wheel and every league or so it fumes and frets a bit against some rustic bridge. From these trifling tourneys though, it emerges only the more eager and impetuous in its path toward the towns below.

Coming nearer, step by step, to the busy haunts of men, the dashing brook takes on a more ambitious air. Little by little it edges its narrow banks aside, drinks in the waters of tributaries, swells with the copious rainfall of the lower valley. From its ladder in the Alleghanies it catches a glimpse of the steeples of Johnstown, red with the glow of the setting sun. Again it spurts and spreads as if conscious of its new importance, and the once tiny rill expands into the dignity of a river, a veritable river, with a name of its own. Big with this sounding symbol of prowess it rushes on as if to sweep by the teeming town in a flood of majesty. To its vast surprise the way is barred. The hand of man has dared to check the will of one that up to now has known no curb save those the forest gods imposed. For an instant the waters, taken aback by this strange audacity, hold themselves in leash. Then, like erl-king in the German legends, they broaden out to engulf their opponent. In vain they surge with crescent surface against the barrier of stone. By day, by night, they beat and breast in angry impotence against the ponderous wall of masonry that man has reared, for pleasure and profit, to stem the mountain stream.

The Awful Rush of Waters.

Suddenly, maddened by the stubborn hindrance, the river grows black and turgid. It rumbles and threatens as if confident of an access of strength that laughs at resistance. From far up the hillside comes a sound, at first soft and soothing as the fountains of Lindaraxa, then rolling onward it takes the voluminous quaver of a distant waterfall. Louder and louder, deeper and deeper, nearer and nearer comes an awful crashing and roaring, till its echoes rebound from the crags of the Alleghanies like peals of thunder and boom of cannon.

On, on, down the steep valley trumpets the torrent into the river at Jamestown. Joined to the waters from the cloud kissed summits of its source, the exultant Conemaugh, with a deafening din, dashes its way through the barricade of stone and starts like a demon on its path of destruction....