The Jew and American Ideals 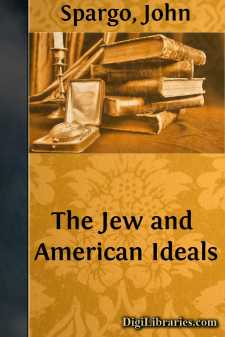 About five years ago I was honored by an invitation to join with a well-known American capitalist and certain other men and women in an attempt to bring about the termination of the great World War. The manufacturer in question believed that it was possible to "get the boys out of the trenches by Christmas," and to that end organized an expedition which is now remembered chiefly for the bellicosity and belligerency of many of the "pacifists" who journeyed to Europe upon the "Peace Ship."

In declining the invitation to associate myself with this expedition, I felt that it was incumbent upon me to explain that, while I doubted the wisdom of the undertaking and felt that it might do harm instead of good, I honored the noble and unselfish motives by which Mr. Ford was inspired. His hatred of war and blood-shed, and his desire to promote peace and good will among all peoples and races, seemed to me to be both profound and sincere and evoked my heartfelt admiration and sympathy. The more I doubted his political judgment—believing that he was being used as a dupe and tool in a very dangerous intrigue—the more willing I was to acknowledge those qualities of mind and heart which distinguished the famous manufacturer, and which the authors of the intrigue sought to exploit and use for sinister ends. On many occasions I have given public expression to my belief in Mr. Ford's sincere and unselfish idealism.

If any justification is required for my now associating the name of Henry Ford with a matter of grave international political importance, I venture to suggest that it can be found in the pre-eminent position which he occupies in one of the great branches of modern industry and in the fact that as recently as two years ago he aspired to a seat in the United States Senate, being nominated for that position by the Democratic party in the great state of Michigan. Upon both counts views expressed by Mr. Ford upon international questions which may involve great and serious national or racial conflicts become the subject of legitimate public interest, and when in furtherance of such views he associates himself with an active policy which deals with one of the most difficult and dangerous problems confronting civilized mankind, his views and his acts assume public importance and invite and compel attention and discussion. Therefore, believing as I do that Mr. Ford is primarily responsible for a propaganda which is subversive of the best traditions and institutions of this Republic, and which has everywhere and at all times resulted in shameful crimes against humanity, and in resistance to every progressive and humane movement, I feel that it is my right and duty to utter my solemn remonstrance and protest.

I have just returned from a tour through several of the European countries most seriously involved in the late war. On the one hand, I was deeply and gratefully impressed while in Europe with the manner in which some of the intensest hatreds engendered by the war appear to be dying out....