The Jest Book The Choicest Anecdotes and Sayings 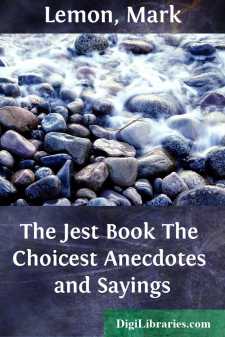 The Compiler of this new Jest Book is desirous to make known that it is composed mainly of old jokes,—some older than Joe Miller himself,—with a liberal sprinkling of new jests gathered from books and hearsay. In the course of his researches he has been surprised to find how many Jests, Impromptus, and Repartees have passed current, century after century, until their original utterer is lost in the "mist of ages"; a Good Joke being transferred from one reputed Wit to another, thus resembling certain rare Wines which are continually being rebottled but are never consumed. Dr. Darwin and Sir Charles Lyell, when they have satisfied themselves as to the Origin of Species and the Antiquity of Man, could not better employ their speculative minds than in determining the origin and antiquity of the venerable "joes" which have been in circulation beyond the remembrance of that mythical personage, "the Oldest Inhabitant."

A true Briton loves a good joke, and regards it like "a thing of beauty," "a joy forever," therefore we may opine that Yorick's "flashes of merriment, which were wont to set the table in a roar," when Hamlet was king in Denmark, were transported hither by our Danish invaders, and descended to Wamba, Will Somers, Killigrew, and other accredited jesters, until Mr. Joseph Miller reiterated many of them over his pipe and tankard, when seated with his delighted auditory at the Black Jack in Clare Market.

Modern Research has been busy with honest Joe's fame, decreeing the collection of his jests to Captain Motley, who wrote short-lived plays in the time of the First and Second Georges; but the same false Medium has affected to discover that Dick Whittington did not come to London City at the tail of a road wagon, neither was he be-ladled by a cross cook, and driven forth to Highgate, when Bow Bells invited him to return and make venture of his Cat, marry Fitzalwyn's daughter, and be thrice Lord Mayor of London, albeit it is written in City chronicles, that Whittington's statue and the effigy of his gold-compelling Grimalkin long stood over the door of New Gate prison-house. We would not have destroyed the faith of the Rising Generation and those who are to succeed it in that Golden Legend, to have been thought as wise as the Ptolemies, or to have been made president of all the Dryasdusts in Europe. No. Let us not part with our old belief in honest Joe Miller, but trust rather to Mr. Morley, the historian of Bartlemy Fair, and visit the Great Theatrical Booth over against the Hospital gate of St. Bartholomew, where Joe, probably, is to dance "the English Maggot dance," and after the appearance of "two Harlequins, conclude with a Grand Dance and Chorus, accompanied with Kettledrums- and Trumpets." And when the Fair is over, and we are no longer invited to "walk up," let us march in the train of the great Mime, until he takes his ease in his inn,—the Black Jack aforesaid,—and laugh at his jibes and flashes of merriment, before the Mad Wag shall be silenced by the great killjoy, Death, and the jester's boon companions shall lay him in the graveyard in Portugal Fields, placing over him a friendly record of his social virtues....