The Itinerary of Benjamin of Tudela

by Benjamin of Tudela 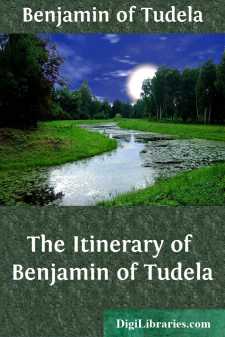 INTRODUCTION I. ISLAM IN THE MIDDLE AGES.

The Itinerary of Benjamin of Tudela throws a flashlight upon one of the most interesting stages in the development of nations.

The history of the civilized world from the downfall of the Roman Empire to the present day may be summarized as the struggle between Cross and Crescent. This struggle is characterized by a persistent ebb and flow. Mohammed in 622 A.D. transformed, as if by magic, a cluster of Bedouin tribes into a warlike people. An Arabian Empire was formed, which reached from the Ebro to the Indus. Its further advance was stemmed in the year 732, just a hundred years after Mohammed's death, by Charles Martel, in the seven days' battle of Tours.

The progress of the culture of the Arabs was as rapid as had been that of their arms. Great cities such as Cairo and Bagdad were built. Commerce and manufactures flourished. The Jews, who enjoyed protection under the benign rule of the Caliphs, transmitted to the Arabs the learning and science of the Greeks. Schools and universities arose in all parts of the Empire. The dark age of Christendom proved to be the golden age of literature for Jew and Arab.

By the eleventh century, however, the Arabs had lost much of their martial spirit. Islam might have lost its ascendancy in the East had not the warlike Seljuk Turks, coming from the highlands of Central Asia, possessed themselves of the countries which, in days of old, constituted the Persian Empire under Darius. The Seljuks became ready converts to Islam, and upheld the failing strength of the Arabs.

It was the ill-treatment by the Seljuks of the Christian pilgrims to Palestine which aroused Christian Europe and led to the First Crusade. The feudal system adopted by the Seljuks caused endless dissension among their petty sovereigns, called "Atabegs", all of whom were nominally vassals of the Caliph at Bagdad. Thus it came about that Islamism, divided against itself, offered but a poor resistance to the advance of the Christians. The Crusaders had little difficulty in making their way to Palestine. They captured Jerusalem, and established the Latin kingdom there.

By the middle of the twelfth century Mohammedan power had shrunk to smaller dimensions. Not only did the Franks hold Palestine and all the important posts on the Syrian coast, but, by the capture of Lesser Armenia, Antioch, and Edessa, they had driven a wedge into Syria, and extended their conquests even beyond the Euphrates.

At length there came a pause in the decline of Islam. Zengi, a powerful Seljuk Atabeg, in 1144 captured Edessa, the outpost of Christendom, and the Second Crusade, led by the Emperor Conrad of Germany and by King Louis VII of France, failed to effect the recapture of the fortress. Nureddin, the far-sighted son and successor of Zengi, and later on Saladin, a Kurd, trained at his court, discovered how to restore the fallen might of Islam and expel the Franks from Asia. A necessary preliminary step was to put an end to the dissensions of the Atabeg rulers....