The Italian Cook Book The Art of Eating Well 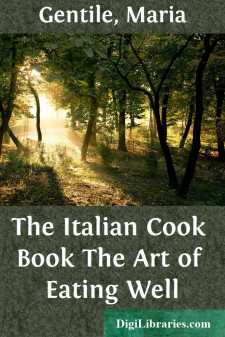 One of the beneficial results of the Great War has been the teaching of thrift to the American housewife. For patriotic reasons and for reasons of economy, more attention has been bestowed upon the preparing and cooking of food that is to be at once palatable, nourishing and economical.

In the Italian cuisine we find in the highest degree these three qualities. That it is palatable, all those who have partaken of food in an Italian trattoria or at the home of an Italian family can testify, that it is healthy the splendid manhood and womanhood of Italy is a proof more than sufficient. And who could deny, knowing the thriftiness of the Italian race, that it is economical?

It has therefore been thought that a book of PRACTICAL RECIPES OF THE ITALIAN CUISINE could be offered to the American public with hope of success. It is not a pretentious book, and the recipes have been made as clear and simple as possible. Some of the dishes described are not peculiar to Italy. All, however, are representative of the Cucina Casalinga of the peninsular Kingdom, which is not the least product of a lovable and simple people, among whom the art of living well and getting the most out of life at a moderate expense has been attained to a very high degree.

To obtain good broth the meat must be put in cold water, and then allowed to boil slowly. Add to the meat some pieces of bones and "soup greens" as, for instance, celery, carrots and parsley. To give a brown color to the broth, some sugar, first browned at the fire, then diluted in cold water, may be added.

While it is not considered that the broth has much nutritive power, it is excellent to promote the digestion. Nearly all the Italian soups are made on a basis of broth.

A good recipe for substantial broth to be used for invalids is the following: Cut some beef in thin slices and place them in a large saucepan; add some salt. Pour cold water upon them, so that they are entirely covered. Cover the saucepan so that it is hermetically closed and place on the cover a receptacle containing water, which must be constantly renewed. Keep on a low fire for six hours, then on a strong fire for ten minutes. Strain the liquid in cheese cloth.

The soup stock, besides being used for soups, is a necessary ingredient in hundreds of Italian dishes.

First a thin sheet of paste is made according to the following directions:

The best and most tender paste is made simply of eggs, flour and salt, water may be substituted for part of the eggs, for economy, or when a less rich paste is needed. Allow about a cup of flour to an egg. Put the flour on a bread board, make a hollow in the middle and break in the egg. Use any extra whites that are on hand. Knead it thoroughly, adding more flour if necessary, until you have a paste you can roll out. Roll it as thin as an eighth of an inch. A long rolling pin is necessary, but any stick, well scrubbed and sand papered, will serve in lieu of the long Italian rolling pin.

Cut from this sheet of paste rounds measuring about three inches in diameter. In the middle of each circle place a spoonful of filling that must be made beforehand, composed of cooked meat (chicken, pork or veal) ground very fine and seasoned with grated cheese, grated lemon peel, nutmeg, allspice, salt. The ground meat is to be mixed with an equal amount of curds or cottage cheese.

When the filling is placed in the circle of paste, fold the latter over and moisten the edge of the paste with the finger dipped in water to make it stay securely closed.

These cappelletti should be cooked in chicken or beef broth until the paste is tender, and served with this broth as a soup.

This excellent and nutritious soup is a godsend for using the stale bread that must never again be thrown away. It is composed of bread crumbs and grated bread, eggs, grated cheese, nutmeg (in very small quantity) and salt, all mixed together and put in broth previously prepared, which must be warm at the moment of the immersion, but not at the boiling point. Then place it on a low fire and stir gently. Any vegetable left over may be added....