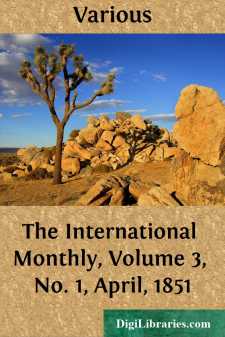 The readers of the International have in the above engraving, from a Daguerreotype by Brady, the best portrait ever published of an illustrious countryman of ours, who, as a novelist, take him all in all, is entitled to precedence of every other now living. "With what amazing power," exclaims Balzac, in the Revue de Paris, "has he painted nature! how all his pages glow with creative fire! Who is there writing English among our contemporaries, if not of him, of whom it can be said that he has a genius of the first order?" And the Edinburgh Review says, "The empire of the sea, has been conceded to him by acclamation;" that, "in the lonely desert or untrodden prairie, among the savage Indians or scarcely less savage settlers, all equally acknowledge his dominion. 'Within this circle none dares walk but he.'" And Christopher North, in the Noctes: "He writes like a hero!" And beyond the limits of his own country, every where, the great critics assign him a place among the foremost of the illustrious authors of the age. In each of the departments of romantic, fiction in which he has written, he has had troops of imitators, and in not one of them an equal. Writing not from books, but from nature, his descriptions, incidents, and characters, are as fresh as the fields of his triumphs. His Harvey Birch, Leather Stocking, Long Tom Coffin, and other heroes, rise before the mind, each in his clearly defined and peculiar lineaments, as striking original creations, as actual persons. His infinitely varied descriptions of the ocean, ships gliding like beings of the air upon its surface, vast solitary wildernesses, and indeed all his delineations of nature, are instinct with the breath of poetry; he is both the Horace Vernet and the Claude Lorraine of novelists; and through all his works are sentiments of genuine courtesy and honor, and an unobtrusive and therefore more powerful assertion of natural rights and dignity.

William Cooper, the emigrant ancestor of James Fenimore Cooper, arrived in this country in 1679, and settled at Burlington, New Jersey. He immediately took an active part in public affairs, and his name appears in the list of members of the Colonial Legislature for 1681. In 1687, or subsequent to the establishment of Penn at Philadelphia, he obtained a grant of land opposite the new city, extending several miles along the margin of the Delaware and the tributary stream which has since borne the name of Cooper's Creek. The branch of the family to which the novelist belongs removed more than a century since into Pennsylvania, in which state his father was born. He married early, and while a young man established himself at a hamlet in Burlington county, New Jersey, which continues to be known by his name, and afterward in the city of Burlington. Having become possessed of extensive tracts of land on the border of Otsego Lake, in central New-York, he began the settlement of his estate there in the autumn of 1785, and in the following spring erected the first house in Cooperstown....