The Insurrection in Paris

by Davy (An Englishman) 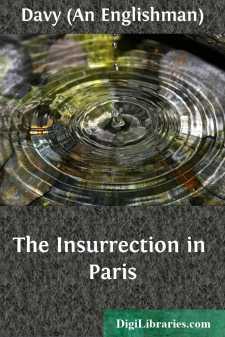 RECOLLECTIONS OF THE PARISIAN INSURRECTION.

The desire of appreciating de visu the results of a five month's siege in a town of two million inhabitants, unexampled in the annals of humanity, made me leave London on the twentieth of March.

Hardly landed in the Capital of France which I thought of finding tranquil and occupied in exercising its genius in repairing the disasters caused by the enemy, I heard with stupefaction that Paris, a prey to civil war, was under the blow of a fresh siege.

Sad change! the German helmets had given place to the French kepys; citizens of the same nation were going to cut one another's throats.

My first thought was to withdraw from this mournful and dangerous spectacle. Of what importance to me, a simple citizen of Great Britain, were the disorders and furies of that people, in turn our most cruel enemy or our friend according to circumstances, as European politics or the interests of sovereigns make of them our adversary or our ally?—Why expose myself voluntarily to the heart-rending and often dangerous trials of a war that had none of my sympathies either on the one side or on the other of the enclosure? Was I going to see a great people breaking its irons and fighting to death in order to recover its rights and liberty?—No—the French people had at last the government of their choice,—the Republic. There was, then, question of an impious war, undertaken by a blind multitude for the profit of a few hidden ambitions: that is to say, a war without grandeur and without interest for a simple spectator.

However, after due reflection, I overcame my repugnance. I had, in my excursions, remarked, among the armed bands, so many heterogeneous elements; that is to say, thousands of individuals of all social positions and of so many nationalities, that I began to think it would perhaps be useful to my compatriots to hear by and by a sincere recital, written by a disinterested pen, of the events about to take place.

I did not conceal from myself the dangers to which my curiosity would expose me; but had I not, and that too without any advantage, incurred as great dangers in escalading Mont-Blanc and in going up along the borders of the Nile? Besides, as is generally the case, the certainty of an imminent peril only served to strengthen my resolution. Moreover, not wishing to run any useless risk, I thought good to take a few precautions: I went to see Monsieur ***, an old French refugee that I had known at London, by the interposition of M. Causidiere. I asked him if he could not procure me a permission, a pass, some paper or other.

«Are you quite decided on staying?»

Asked that gentleman, whom I do not name for a reason that will be appreciated by the reader.

«Could nothing, not even good advice, make you renounce your intention?»

«Then come with me to the Town-hall.»

I followed him; and, half an hour afterwards, I was in possession of a pass signed by two members of the Commune.

This precaution was not to be useless....