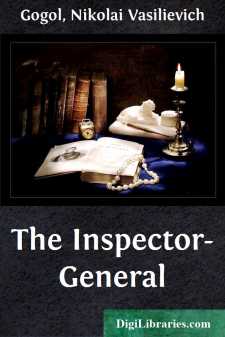 The Inspector-General is a national institution. To place a purely literary valuation upon it and call it the greatest of Russian comedies would not convey the significance of its position either in Russian literature or in Russian life itself. There is no other single work in the modern literature of any language that carries with it the wealth of associations which the Inspector-General does to the educated Russian. The Germans have their Faust; but Faust is a tragedy with a cosmic philosophic theme. In England it takes nearly all that is implied in the comprehensive name of Shakespeare to give the same sense of bigness that a Russian gets from the mention of the Revizor.

That is not to say that the Russian is so defective in the critical faculty as to balance the combined creative output of the greatest English dramatist against Gogol's one comedy, or even to attribute to it the literary value of any of Shakespeare's better plays. What the Russian's appreciation indicates is the pregnant role that literature plays in the life of intellectual Russia. Here literature is not a luxury, not a diversion. It is bone of the bone, flesh of the flesh, not only of the intelligentsia, but also of a growing number of the common people, intimately woven into their everyday existence, part and parcel of their thoughts, their aspirations, their social, political and economic life. It expresses their collective wrongs and sorrows, their collective hopes and strivings. Not only does it serve to lead the movements of the masses, but it is an integral component element of those movements. In a word, Russian literature is completely bound up with the life of Russian society, and its vitality is but the measure of the spiritual vitality of that society.

This unique character of Russian literature may be said to have had its beginning with the Inspector-General. Before Gogol most Russian writers, with few exceptions, were but weak imitators of foreign models. The drama fashioned itself chiefly upon French patterns. The Inspector-General and later Gogol's novel, Dead Souls, established that tradition in Russian letters which was followed by all the great writers from Dostoyevsky down to Gorky.

As with one blow, Gogol shattered the notions of the theatre-going public of his day of what a comedy should be. The ordinary idea of a play at that time in Russia seems to have been a little like our own tired business man's. And the shock the Revizor gave those early nineteenth-century Russian audiences is not unlike the shocks we ourselves get when once in a while a theatrical manager is courageous enough to produce a bold modern European play. Only the intensity of the shock was much greater. For Gogol dared not only bid defiance to the accepted method; he dared to introduce a subject-matter that under the guise of humor audaciously attacked the very foundation of the state, namely, the officialdom of the Russian bureaucracy. That is why the Revizor marks such a revolution in the world of Russian letters....