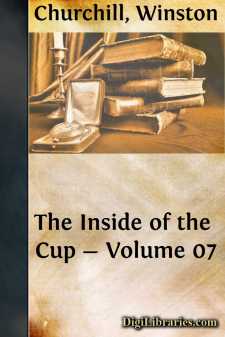 Pondering over Alison's note, he suddenly recalled and verified some phrases which had struck him that summer on reading Harnack's celebrated History of Dogma, and around these he framed his reply. "To act as if faith in eternal life and in the living Christ was the simplest thing in the world, or a dogma to which one has to submit, is irreligious. . . It is Christian to pray that God would give the Spirit to make us strong to overcome the feelings and the doubts of nature. . . Where this faith, obtained in this way, exists, it has always been supported by the conviction that the Man lives who brought life and immortality to light. To hold fast this faith is the goal of life, for only what we consciously strive for is in this matter our own. What we think we possess is very soon lost."

"The feelings and the doubts of nature!" The Divine Discontent, the striving against the doubt that every honest soul experiences and admits. Thus the contrast between her and these others who accepted and went their several ways was brought home to him.

He longed to talk to her, but his days were full. Yet the very thought of her helped to bear him up as his trials, his problems accumulated; nor would he at any time have exchanged them for the former false peace which had been bought (he perceived more and more clearly) at the price of compromise.

The worst of these trials, perhaps, was a conspicuous article in a newspaper containing a garbled account of his sermon and of the sensation it had produced amongst his fashionable parishioners. He had refused to see the reporter, but he had been made out a hero, a socialistic champion of the poor. The black headlines were nauseating; and beside them, in juxtaposition, were pen portraits of himself and of Eldon Parr. There were rumours that the banker had left the church until the recalcitrant rector should be driven out of it; the usual long list of Mr. Parr's benefactions was included, and certain veiled paragraphs concerning his financial operations. Mr. Ferguson, Mr. Plimpton, Mr. Constable, did not escape,—although they, too, had refused to be interviewed . . . .

The article brought to the parish house a bevy of reporters who had to be fought off, and another batch of letters, many of them from ministers, in approval or condemnation.

His fellow-clergymen called, some to express sympathy and encouragement, more of them to voice in person indignant and horrified protests. Dr. Annesley of Calvary—a counterpart of whose rubicund face might have been found in the Council of Trent or in mediaeval fish-markets —pronounced his anathemas with his hands folded comfortably over his stomach, but eventually threw to the winds every vestige of his ecclesiastical dignity . . . .

Then there came a note from the old bishop, who was traveling. A kindly note, withal, if non-committal,—to the effect that he had received certain communications, but that his physician would not permit him to return for another ten days or so. He would then be glad to see Mr....