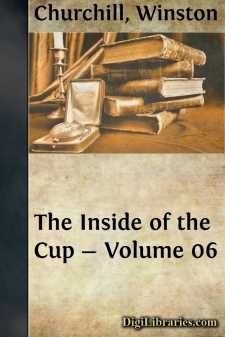 Looking backward, Hodder perceived that he had really come to the momentous decision of remaining at St. John's in the twilight of an evening when, on returning home from seeing Kate Marcy at Mr. Bentley's he had entered the darkening church. It was then that his mission had appeared to him as a vision. Every day, afterward, his sense and knowledge of this mission had grown stronger.

To his mind, not the least of the trials it was to impose upon him, and one which would have to be dealt with shortly, was a necessary talk with his assistant, McCrae. If their relationship had from the beginning been unusual and unsatisfactory, adjectives would seem to defy what it had become during the summer. What did McCrae think of him? For Hodder had, it will be recalled, bidden his assistant good-by—and then had remained. At another brief interview, during which McCrae had betrayed no surprise, uttered no censure or comment, Hodder had announced his determination to remain in the city, and to take no part in the services. An announcement sufficiently astounding. During the months that followed, they had met, at rare intervals, exchanged casual greetings, and passed on. And yet Hodder had the feeling, more firmly planted than ever, that McCrae was awaiting, with an interest which might be called suspense, the culmination of the process going on within him.

Well, now that he had worked it out, now that he had reached his decision, it was incumbent upon him to tell his assistant what that decision was. Hodder shrank from it as from an ordeal. His affection for the man, his admiration for McCrae's faithful, untiring, and unrecognized services had deepened. He had a theory that McCrae really liked him—would even sympathize with his solution; yet he procrastinated. He was afraid to put his theory to the test. It was not that Hodder feared that his own solution was not the right one, but that McCrae might not find it so: he was intensely concerned that it should also be McCrae's solution—the answer, if one liked, to McCrae's mute and eternal questionings. He wished to have it a fruition for McCrae as well as for himself; since theoretically, at least, he had pierced the hard crust of his assistant's exterior, and conceived him beneath to be all suppressed fire. In short, Hodder wished to go into battle side by side with McCrae. Therein lay his anxiety.

Another consideration troubled him—McCrae's family, dependent on a rather meagre salary. His assistant, in sustaining him in the struggle he meant to enter, would be making even a greater sacrifice than himself. For Hodder had no illusions, and knew that the odds against him were incalculable. Whatever, if defeated, his own future might be, McCrae's was still more problematical and tragic.

The situation, when it came, was even more difficult than Hodder had imagined it, since McCrae was not a man to oil the wheels of conversation. In silence he followed the rector up the stairs and into his study, in silence he took the seat at the opposite side of the table....