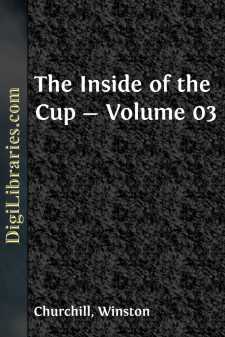 THE DIVINE DISCONTENT I

It was the last Sunday in May, and in another week the annual flight to the seashore and the mountains would have begun again. The breezes stealing into the church through the open casements wafted hither and thither the odours of the chancel flowers, and mingled with those fainter and subtler perfumes set free by the rustling of summer gowns.

As on this day he surveyed his decorous and fashionable congregation, Hodder had something of that sense of extremity which the great apostle to the Gentiles himself must have felt when he stood in the midst of the Areopagus and made his vain yet sublime appeal to Athenian indifference and luxury. "And the times of this ignorance God winked at; but now commandeth all men everywhere to repent." . . Some, indeed, stirred uneasily as the rector paused, lowering their eyes before the intensity of his glance, vaguely realizing that the man had flung the whole passion of his being into the appeal.

Heedlessness—that was God's accusation against them, against the age. Materialism, individualism! So absorbed were they in the pursuit of wealth, of distraction, so satisfied with the current philosophy, so intent on surrounding themselves with beautiful things and thus shutting out the sterner view, that they had grown heedless of the divine message. How few of them availed themselves of their spiritual birthright to renew their lives at the altar rail! And they had permitted their own children to wander away . . . . Repent!

There was a note of desperation in his appeal, like that of the hermit who stands on a mountain crag and warns the gay and thoughtless of the valley of the coming avalanche. Had they heard him at last? There were a few moments of tense silence, during which he stood gazing at them. Then he raised his arm in benediction, gathered up his surplice, descended the pulpit steps, and crossed swiftly the chancel . . . .

He had, as it were, turned on all the power in a supreme effort to reach them. What if he had failed again? Such was the misgiving that beset him, after the service, as he got out of his surplice, communicated by some occult telepathy . . . . Mr. Parr was awaiting him, and summoning his courage, hope battling against intuition, he opened the door into the now empty church and made his way toward the porch, where the sound of voices warned him that several persons were lingering. The nature of their congratulations confirmed his doubts. Mrs. Plimpton, resplendent and looking less robust than usual in one of her summer Paris gowns, greeted him effusively.

"Oh, Mr. Hodder, what a wonderful sermon!" she cried. "I can't express how it made me feel—so delinquent! Of course that is exactly the effect you wished. And I was just telling Wallis I was so glad I waited until Tuesday to go East, or I should have missed it. You surely must come on to Hampton and visit us, and preach it over again in our little stone church there, by the sea. Good-by and don't forget! I'll write you, setting the date, only we'd be glad to have you any time."