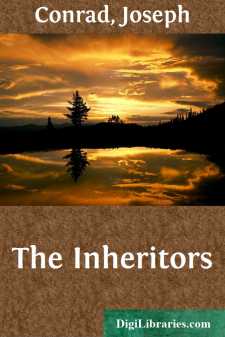 We went through the old gateway and I cast a glance over my shoulder. The noon sun was shining over the masonry, over the little saints' effigies, over the little fretted canopies, the grime and the white streaks of bird-dropping.

"There," I said, pointing toward it, "doesn't that suggest something to you?"

She made a motion with her head—half negative, half contemptuous.

"But," I stuttered, "the associations—the ideas—the historical ideas—"

"You Americans," I began, but her smile stopped me. It was as if she were amused at the utterances of an old lady shocked by the habits of the daughters of the day. It was the smile of a person who is confident of superseding one fatally.

In conversations of any length one of the parties assumes the superiority—superiority of rank, intellectual or social. In this conversation she, if she did not attain to tacitly acknowledged temperamental superiority, seemed at least to claim it, to have no doubt as to its ultimate according. I was unused to this. I was a talker, proud of my conversational powers.

I had looked at her before; now I cast a sideways, critical glance at her. I came out of my moodiness to wonder what type this was. She had good hair, good eyes, and some charm. Yes. And something besides—a something—a something that was not an attribute of her beauty. The modelling of her face was so perfect and so delicate as to produce an effect of transparency, yet there was no suggestion of frailness; her glance had an extraordinary strength of life. Her hair was fair and gleaming, her cheeks coloured as if a warm light had fallen on them from somewhere. She was familiar till it occurred to you that she was strange.

"Which way are you going?" she asked.

"I am going to walk to Dover," I answered.

I looked at her—intent on divining her in that one glance. It was of course impossible. "There will be time for analysis," I thought.

She shook her head. No. She was not an Australian either, she came from none of the British colonies.

"You are not English," I affirmed. "You speak too well." I was piqued. She did not answer. She smiled again and I grew angry. In the cathedral she had smiled at the verger's commendation of particularly abominable restorations, and that smile had drawn me toward her, had emboldened me to offer deferential and condemnatory remarks as to the plaster-of-Paris mouldings. You know how one addresses a young lady who is obviously capable of taking care of herself. That was how I had come across her. She had smiled at the gabble of the cathedral guide as he showed the obsessed troop, of which we had formed units, the place of martyrdom of Blessed Thomas, and her smile had had just that quality of superseder's contempt. It had pleased me then; but, now that she smiled thus past me—it was not quite at me—in the crooked highways of the town, I was irritated....