The Influence of India and Persia on the Poetry of Germany 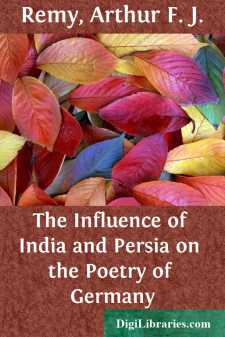 The knowledge which mediæval Europe had of India and Persia was mostly indirect, and, as might be expected, deficient both in correctness and extent, resting, as it did, on the statements of classical and patristic writers, on hearsay and on oral communication. In the accounts of the classic writers, especially in those of Pliny, Strabo, Ptolemy, truth and fiction were already strangely blended. Still more was this the case with such compilers and encyclopædists as Solinus, Cassiodorus and Isidorus of Sevilla, on whom the mediæval scholar depended largely for information. All these writers, in so far as they speak of India, deal almost entirely with its physical description, its cities and rivers, its wealth of precious stones and metals, its spices and silks, and in particular its marvels and wonders. Of its religion we hear but little, and as to its literature we have only a few vague statements of Arrian, Aelian and Dio Chrysostomus. When the last mentioned author tells us that the ancient Hindus sang in their own language the poems of Homer, it shows that he had no idea of the fact that the great Sanskrit epics, to which the passage undoubtedly alludes, were independent poems. To him they appeared to be nothing more than versions of Homer. Aelian makes a similar statement, but cautiously adds εГЎВјВґ τι χρГЎВЅВґ πιστεГЏВЌειν τοις ГЎВЅвЂπГЎВЅВІρ τοГЏВЌτων ГЎВјВ±στορουσιν. Philostratus represents the Hindu sage Iarchas as well acquainted with the Homeric poems, but nowhere does his hero Apollonius of Tyana show the slightest knowledge of Sanskrit literature.

Nor do the classic authors give us any more information about the literature of Persia, though the Iranian religion received some attention. Aristotle and Theopompus were more or less familiar with Zoroastrian tenets, and allusions to the prophet of ancient Iran are not infrequent in classic writers. But their information concerning him is very scanty and inaccurate. To them Zoroaster is simply the great Magian, more renowned for his magic art than for his religious system. Of the national Iranian legends, glimpses of which we catch in the Avesta (esp. Yt. 19), and which must have existed long before the Sassanian period and the time of FirdausГ„В«, the Greek and Roman authors have recorded nothing.

But Europe was not limited to the classic and patristic writers for information about the Orient. The points of contact between the Eastern and Western world were numerous even before the Portuguese showed the way to India. Alexandria was the seat of a lively commerce between the Roman Empire and India during the first six centuries of the Christian era; the Byzantine Empire was always in close relations, hostile or friendly, with Persia; the Arabs had settled in Spain, Southern Italy and Sicily; and the Mongols ruled for almost two centuries in Russia. All these were factors in the transmission of Oriental influence. And, as far as Germany is concerned, we must remember that in the tenth century, owing to the marriage of the emperor Otto II to the Greek princess Theophano, the relations between the German and Byzantine Empires were especially close. Furthermore the Hohenstaufen emperor, Frederick II, it will be remembered, was a friend and patron of the Saracens in Italy and Sicily, who in turn supported him loyally in his struggle against the papacy. Above all, the crusades, which brought the civilization of the West face to face with that of the East, were a powerful factor in bringing Oriental influence into Europe. The effect they had on the European mind is shown by the great number of French and German poems which lay their scene of action in Eastern lands, or, as will be shown presently, introduce persons and things from India and Persia.

Of course it is as a rule impossible to tell precisely how and when the Oriental influence came into Europe, but that it did come is absolutely certain....