The Industries of Animals 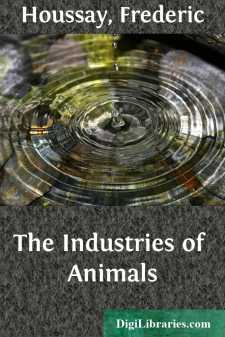 The naturalists of yesterday and the naturalists of to-day. — The study of animals, plants, rocks, and of natural objects generally, was formerly called “natural history”; but this term is tending to disappear from our vocabulary and to give place to the term “natural sciences.” What is the reason of this change, and to what does it correspond? for it is rare for a word to be modified in so short a time if the thing designated has not itself varied.

Exterior forms have certainly changed, and the naturalist of yesterday makes upon us the impression of a legendary being. I refer to the person described in George Sand’s romances, marching vigorously over hills and valleys in search of a rare insect, which he pricked with delight, or of a plant difficult to reach, which he triumphantly dried and fixed on a leaf of paper bearing the date of the discovery and the name of the locality. A herbarium became a sort of journal, recalling to its fortunate possessor all the wanderings of the happy chase, all the delightful sounds and sights of the country. Every naturalist concealed within him a lover of idylls or eclogues. Assuredly all the preliminary studies which resulted from these excursions were necessary; we owe gratitude to our predecessors, and we profit from their labours, sometimes regretting the loss of the picturesque fashion in which their researches were carried out.

The naturalist of to-day usually lives more in the laboratory than in the country. Occasional expeditions to the coast or dredgings are the only links that attach him to nature; the scalpel and the microtome have replaced the collector’s pins, and the magnifying glass gives place to the microscope. When the observer begins to pursue his studies in the laboratory he no longer cares to pass the threshold. He has still so much to learn concerning the most common creatures that it seems useless to him to waste his time in seeking those that are rarer, unless he takes into account the unquestionable pleasure of rambling through woods or along coasts; — but such a consideration does not belong to the scientific domain.

A change of conditions of this nature does not suffice to create a science. To take away from a study all that rendered it pleasant and easy, and to make it the property of a small coterie, when it was formerly accessible to all, is not sufficient to render it scientific. It is a fatality rather than a triumph to have undergone such a change. The change is an effect rather than a cause.

When little or nothing was known it was necessary to begin by examining the phenomena which first met the eyes of the observer, such as the customs of animals and the characters which distinguished them from each other. Their differences and resemblances were studied; they were formed into groups, classed and arranged in an order recalling as much as possible their natural relations. In classifying it is impossible to consider all the facts or the result would be chaos; it is necessary to choose the characters and to give preponderance to certain of them....