The Independence of Claire 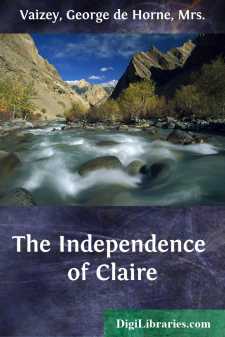 Claire Gifford stood in the salon of the Brussels pension which had been her home for the last three years, and bent her brows in consideration of an all-absorbing problem. “Can I marry him?” she asked herself once and again, with the baffling result that every single time her brain answered instantly, “You must!” the while her heart rose up in rebellion, and cried, “I won’t!” Many girls have found themselves in the same predicament before and since, but few have had stronger reasons for sacrificing personal inclination on the altar of filial duty than Claire knew at this minute.

To begin with, the relationship between herself and her mother was more intimate than is usually the case, for Claire was an only child, and Mrs Gifford a widow only eighteen years older than herself. Briefly stated, the family history was as follows—Eleanor Guyther had been the only child of stern, old-world parents, and at seventeen had run away from the house which had been more like a prison than a home, to marry a handsome young artist who had been painting in the neighbourhood during the summer months; a handsome merry-faced boy of twenty-one, whose portrait Claire treasured in an old-fashioned gold locket, long since discarded by her mother, who followed the fashion in jewellery as well as in dress. It was strange to look at the face of a father who was no older than oneself, and Claire had spent many hours gazing at the pictured face, and trying to gain from it some idea of the personality of the man of whom her mother persistently refused to speak.

Mrs Gifford shrank from all disagreeables, great and small, and systematically turned her back on anything which was disturbing or painful, so that it was only from chance remarks that her daughter had gained any information about the past. She knew that her father had been a successful artist, although not in the highest sense of the term. He had a trick of turning out pretty domestic pictures which appealed to the taste of the million, and which, being purchased by enterprising dealers, were reproduced in cheap prints to deck the walls of suburban parlours. While he lived he made a sufficient income, and before his death a formal reconciliation had taken place between the runaway daughter and her north-country parents, from whom she later inherited the money which had supported herself and her daughter throughout the years of her widowhood.

Claire had the vaguest idea as to the amount of her mother’s means, for until the last few years the question of money had never arisen, they had simply decided what they wished to do, without considering the cost, but of late there had been seasons of financial tightness, and the morning on which this history begins had brought a most disagreeable awakening.

Mrs Gifford was seated in the salon staring disconsolately at a note which had just arrived by the afternoon post. It was a very disagreeable note, for it stated in brief and callous terms that her account at the bank was overdrawn to the extent of three hundred francs, and politely requested that the deficit should be made good....