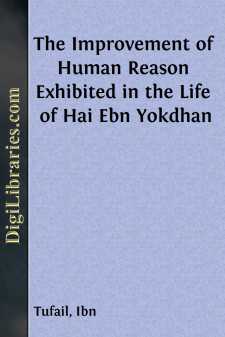 When Mr. Pococke first publish'd this Arabick Author with his accurate Latin Version, Anno 1671. Dr. Pococke his Father, that late eminent Professor of the Oriental Languages in the University of Oxford, prefix'd a Preface to it; in which he tells us, that he has good Reason to think, that this Author was contemporary with Averroes, who died very ancient in the Year of the Hegira 595, which is co-incident with the 1198th Year of our Lord; according to which Account, the Author liv'd something above five hundred Years ago.

He liv'd in Spain, as appears from one or two Passages in this Book. He wrote some other Pieces, which are not come to our Hands. This has been very well receiv'd in the East; one Argument of which is, that it has been translated by R. Moses Narbonensis into Hebrew, and illustrated with a large Commentary. The Design of the Author is to shew, how Human Capacity, unassisted by any External Help, may, by due Application, attain to the Knowledge of Natural Things, and so by Degrees find out its Dependance upon a Superior Being, the Immortality of the Soul, and all things necessary to Salvation.

How well he has succeeded in this Attempt, I leave to the Reader to judge. 'Tis certain, that he was a Man of Parts and very good Learning, considering the Age he liv'd in, and the way of studying in those Times. There are a great many lively Stroaks in it; and I doubt not but a judicious Reader will find his Account in the Perusal of it.

I was not willing ('though importun'd) to undertake the translating it into English, because I was inform'd that it had been done twice already; once by Dr. Ashwell, another time by the Quakers, who imagin'd that there was something in, it that favoured their Enthusiastick Notions. However, taking it for granted, that both these Translations we're not made out of the Original Arabick, but out of the Latin; I did not question but they had mistaken the Sense of the Author in many places. Besides, observing that a great many of my friends whom I had a desire to oblige, and other Persons whom I would willingly incline to a more favourable Opinion of Arabick Learning, had not seen this Book; and withal, hoping that I might add something by way of Annotation or Appendix, which would not be altogether useless; I at last ventur'd to translate it a-new.

I have here and there added a Note, in which there is an account given of some, great Man, some Custom of the Mahometans explain'd, or something of that Nature, which I hope will not be unacceptable. And lest any Person should, through mistake, make any ill use of it, I have subjoin'd an Appendix, the Design of which the Reader may see in its proper place.

THE BOOKSELLER TO THE READER.

When I first undertook the Publication of this English Translation, I thought it would not be amiss to present the World with a Specimen of it first. But since the Introduction is such, that the Reader can no more by it give a Guess at what is contain'd in the Book itself, than a Man can judge of his Entertainment by seeing the Cloath laid; I have thought it necessary to give him a Bill of Fare....