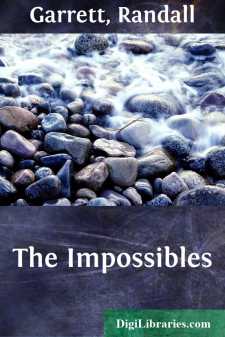 Since the publication of BRAIN TWISTER (Pyramid Book F-783), Mark (Laurence M. Janifer) Phillips (Randall Philip Garrett) has, or have, undergone several changes. In order to keep the reader posted on the latest developments regarding this author, or these authors, he, or they, has, or have, passed on the following details:

GARRETT is still engaged. He and his charming fiancee plan to run out of excuses during the early Fall of 1994, but this date may be changed at any time by mutual agreement, or the end of the world. He has given up an interest in river pollution in favor of a new hobby, grading type-cleaner. Garrett, who spends an hour each day expanding his repertoire, now claims the ability to distinguish year and vineyard for over one thousand type-cleaners.

JANIFER is still on the other hand. He has had his eyeglasses cleaned, and is happy to report that he has recently met a woman. The woman, however, seems to have been looking for a man. Janifer's hobbies, humming and blinking, remain constant, but in an effort to add more healthful activity to his life he has begun training in leaping to conclusions. He states that he can now clear a conclusion of better than seven feet, eight and one-half inches from a running start.

THE IMPOSSIBLES was written in six days. On the seventh day, nothing of any interest whatsoever occurred.

without whose accident in 1945 this series would not have been possible.

The sidewalk was as soft as a good bed. Malone lay curled on it, thinking about nothing at all. He was drifting off into a wonderful dream, and he didn't want to interrupt it. There was this girl, a beautiful girl, more wonderful than anything he had ever imagined, with big blue eyes and long blonde hair and a figure that made the average pin-up girl look like a man. And she had her soft white hand on his arm, and she was looking, up at him with trust and devotion and even adoration in her eyes, and her voice was the softest possible whisper of innocence and promise.

"I'd love to go up to your apartment with you, Mr. Malone," she said.

Malone smiled back at her, gently but with complete confidence. "Call me Ken," he said, noticing that he was seven feet tall and superbly muscled. He put his free hand on the girl's warm, soft shoulder and she wriggled with delight.

"All right—Ken," she said. "You know, I've never met anyone like you before. I mean, you're so wonderful and everything."

Malone chuckled modestly, realizing, in passing, how full and rich his voice had become. He felt a weight pressing over his heart, and knew that it was his wallet, stuffed to bursting with thousand-dollar bills.

But was this a time to think of money?

No, Malone told himself. This was the time for adventure, for romance, for love. He looked down at the girl and put his arm around her waist. She snuggled closer.

He led her easily down the long wide street to his car at the end of the block. It stood in godlike solitude, a beautiful red Cadillac capable of going a hundred and ten miles an hour in any gear, equipped with fully automatic steering and braking, and with a stereophonic radio, a hi-fi and a 3-D set installed in both front and back seats. It was a 1972 job, but he meant to trade it in on something even better when the 1973 models came out....