The Idea of Progress An inguiry into its origin and growth 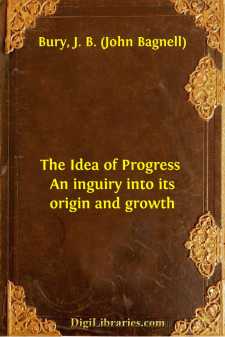 We may believe in the doctrine of Progress or we may not, but in either case it is a matter of interest to examine the origins and trace the history of what is now, even should it ultimately prove to be no more than an idolum saeculi, the animating and controlling idea of western civilisation. For the earthly Progress of humanity is the general test to which social aims and theories are submitted as a matter of course. The phrase CIVILISATION AND PROGRESS has become stereotyped, and illustrates how we have come to judge a civilisation good or bad according as it is or is not progressive. The ideals of liberty and democracy, which have their own ancient and independent justifications, have sought a new strength by attaching themselves to Progress. The conjunctions of "liberty and progress," "democracy and progress," meet us at every turn. Socialism, at an early stage of its modern development, sought the same aid. The friends of Mars, who cannot bear the prospect of perpetual peace, maintain that war is an indispensable instrument of Progress. It is in the name of Progress that the doctrinaires who established the present reign of terror in Russia profess to act. All this shows the prevalent feeling that a social or political theory or programme is hardly tenable if it cannot claim that it harmonises with this controlling idea.

In the Middle Ages Europeans followed a different guiding star. The idea of a life beyond the grave was in control, and the great things of this life were conducted with reference to the next. When men's deepest feelings reacted more steadily and powerfully to the idea of saving their souls than to any other, harmony with this idea was the test by which the opportuneness of social theories and institutions was judged. Monasticism, for instance, throve under its aegis, while liberty of conscience had no chance. With a new idea in control, this has been reversed. Religious freedom has thriven under the aegis of Progress; monasticism can make no appeal to it.

For the hope of an ultimate happy state on this planet to be enjoyed by future generations—or of some state, at least, that may relatively be considered happy—has replaced, as a social power, the hope of felicity in another world. Belief in personal immortality is still very widely entertained, but may we not fairly say that it has ceased to be a central and guiding idea of collective life, a criterion by which social values are measured? Many people do not believe in it; many more regard it as so uncertain that they could not reasonably permit it to affect their lives or opinions. Those who believe in it are doubtless the majority, but belief has many degrees; and one can hardly be wrong in saying that, as a general rule, this belief does not possess the imaginations of those who hold it, that their emotions react to it feebly, that it is felt to be remote and unreal, and has comparatively seldom a more direct influence on conduct than the abstract arguments to be found in treatises on morals.

Under the control of the idea of Progress the ethical code recognised in the Western world has been reformed in modern times by a new principle of far-reaching importance which has emanated from that idea. When Isocrates formulated the rule of life, "Do unto others," he probably did not mean to include among "others" slaves or savages. The Stoics and the Christians extended its application to the whole of living humanity. But in late years the rule has received a vastly greater extension by the inclusion of the unborn generations of the future. This principle of duty to posterity is a direct corollary of the idea of Progress. In the recent war that idea, involving the moral obligation of making sacrifices for the sake of future ages, was constantly appealed to; just as in the Crusades, the most characteristic wars of our medieval ancestors, the idea of human destinies then in the ascendant lured thousands to hardship and death.

The present attempt to trace the genesis and growth of the idea in broad outline is a purely historical inquiry, and any discussion of the great issue which is involved lies outside its modest scope. Occasional criticisms on particular forms which the creed of Progress assumed, or on arguments which were used to support it, are not intended as a judgment on its general validity....