The Hurricane Guide Being An Attempt To Connect The Rotary Gale Or Revolving Storm With Atmospheric Waves. 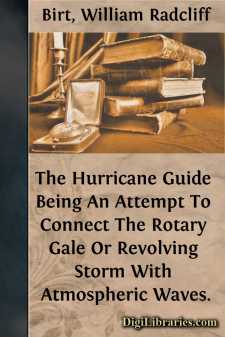 CHAPTER I. PHÆNOMENA OF REVOLVING STORMS.

It is the object of the following pages to exhibit, so far as observation may enable us, and in as brief a manner as possible, the connexion, if any, that exists between those terrific meteorological phænomena known as "revolving storms," and those more extensive and occult but not less important phænomena, "atmospheric waves."

To the great body of our seamen, whether in her Majesty's or the mercantile service, the subject can present none other than the most interesting features. The laws that govern the transmission of large bodies of air from one part of the oceanic surface to another, either in a state of rapid rotation or presenting a more or less rectilineal direction, must at all times form an important matter of inquiry, and bear very materially on the successful prosecution of the occupation of the voyager.

In order to place the subjects above alluded to in such a point of view that the connexion between them may be readily seen, it will be important to notice the principal phænomena presented by each. Without going over the ground so well occupied by those able writers on the subject of storms—Redfield, Reid, Piddington, and Thom—it will be quite sufficient for our present purpose simply to notice the essential phænomena of revolving storms as manifested by the barometer and vane. The usual indications of a storm in connexion with these instruments are the falling of the barometer and the freshening of the wind, and it is generally considered that a rapid fall of the mercury in the hurricane regions invariably precedes the setting in of a storm.

There are three classes of phænomena that present themselves to an observer, according as he is situated on the line or axis of translation, or in either the right or left hand semicircle of the storm. These will be rendered very apparent by a little attention to the annexed engraving, fig. 1.

In this figure the arrow-head is supposed to be directed true north, and the hurricane—as is the case in the American storms north of the 30th parallel—to be moving towards the N.E. on the line N.E.—S.W. If the ship take the hurricane with the wind S.E.,—the letters within the two larger circles indicating the direction of the wind in the storm according to the rotation as shown by the circle of arrow-heads, and which it is to be particularly noted is in the northern hemisphere contrary to the direction in which the hands of a watch move: in the southern hemisphere the rotation is reversed—the only phænomena presented by the storm are as follows:—The wind continues to blow from the S.E., increasing considerably in force with the barometer falling to a very great extent until the centre of the storm reaches the ship, when the fury of the winds is hushed, and a lull or calm takes place, generally for about half an hour, after which the wind springs up mostly with increased violence, but from the opposite quarter N.W., the barometer begins to rise, and as the storm passes off, the force of the wind abates....