The Hungry Stones and Other Stories 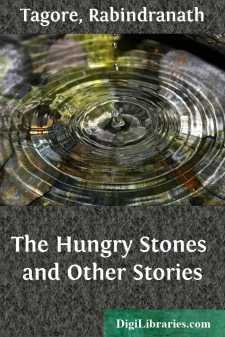 My kinsman and myself were returning to Calcutta from our Puja trip when we met the man in a train. From his dress and bearing we took him at first for an up-country Mahomedan, but we were puzzled as we heard him talk. He discoursed upon all subjects so confidently that you might think the Disposer of All Things consulted him at all times in all that He did. Hitherto we had been perfectly happy, as we did not know that secret and unheard-of forces were at work, that the Russians had advanced close to us, that the English had deep and secret policies, that confusion among the native chiefs had come to a head. But our newly-acquired friend said with a sly smile: "There happen more things in heaven and earth, Horatio, than are reported in your newspapers." As we had never stirred out of our homes before, the demeanour of the man struck us dumb with wonder. Be the topic ever so trivial, he would quote science, or comment on the Vedas, or repeat quatrains from some Persian poet; and as we had no pretence to a knowledge of science or the Vedas or Persian, our admiration for him went on increasing, and my kinsman, a theosophist, was firmly convinced that our fellow-passenger must have been supernaturally inspired by some strange "magnetism" or "occult power," by an "astral body" or something of that kind. He listened to the tritest saying that fell from the lips of our extraordinary companion with devotional rapture, and secretly took down notes of his conversation. I fancy that the extraordinary man saw this, and was a little pleased with it.

When the train reached the junction, we assembled in the waiting room for the connection. It was then 10 P.M., and as the train, we heard, was likely to be very late, owing to something wrong in the lines, I spread my bed on the table and was about to lie down for a comfortable doze, when the extraordinary person deliberately set about spinning the following yarn. Of course, I could get no sleep that night.

When, owing to a disagreement about some questions of administrative policy, I threw up my post at Junagarh, and entered the service of the Nizam of Hydria, they appointed me at once, as a strong young man, collector of cotton duties at Barich.

Barich is a lovely place. The Susta "chatters over stony ways and babbles on the pebbles," tripping, like a skilful dancing girl, in through the woods below the lonely hills. A flight of 150 steps rises from the river, and above that flight, on the river's brim and at the foot of the hills, there stands a solitary marble palace. Around it there is no habitation of man—the village and the cotton mart of Barich being far off.

About 250 years ago the Emperor Mahmud Shah II. had built this lonely palace for his pleasure and luxury. In his days jets of rose-water spurted from its fountains, and on the cold marble floors of its spray-cooled rooms young Persian damsels would sit, their hair dishevelled before bathing, and, splashing their soft naked feet in the clear water of the reservoirs, would sing, to the tune of the guitar, the ghazals of their vineyards....