The Human Side of Animals 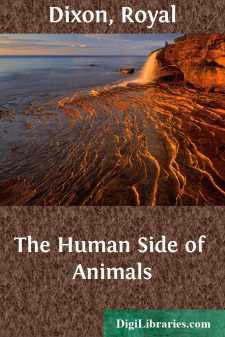 "And in the lion or the frog—In all the life of moor or fen—In ass and peacock, stork and dog,He read similitudes of men."

More and more science is being taught in a new way. More and more men are beginning to discard the lumber of the brain's workshop to get at real facts, real conclusions. Laboratories, experiments, tables, classifications are all very vital and all very necessary but sometimes their net result is only to befog and confuse. Occasionally it becomes important for us to cast aside all dogmatic restraints and approach the wonders of life from a new angle and with the untrammelled spirit of a little child.

In this book I have attempted to bring together many old and new observations which tend to show the human-like qualities of animals. The treatment is neither formal nor scholastic, in fact I do not always remain within the logical confines of the title. My sole purpose is to make the reader self-active, observative, free from hide-bound prejudice, and reborn as a participant in the wonderful experiences of life which fill the universe. I hope to lead him into a new wonderland of truth, beauty and love, a land where his heart as well as his eyes will be opened.

In attempting to understand the animals I have used a method a great deal like that of the village boy, who when questioned as to how he located the stray horse for which a reward of twenty dollars had been offered, replied, "I just thought what I would do if I were a horse and where I would go—and there I went and found him." In some such way I have tried to think why animals do certain things, I have studied them in many places and under all conditions, and those acts of theirs which, if performed by children, would come under the head of wisdom and intelligence, I have classified as such.

Life is one throughout. The love that fills a mother's heart when she sees her first-born babe, is also felt by the mother bear, only in a different way, when she sees her baby cubs playing before her humble cave dwelling. The sorrow that is felt by the human heart when a beloved one dies is experienced in only a little less degree by an African ape when his mate is shot dead by a Christian missionary. The grandmother sheep that watches her numerous little lamb grandchildren on the hillside, while their mothers are away grazing, is just as mindful of their care as any human grandparent could be. One drop of water is like the ocean; and love is love.

The trouble with science is that too often it leaves out love. If you agree that we cannot treat men like machines, why should we put animals in that class? Why should we fall into the colossal ignorance and conceit of cataloging every human-like action of animals under the word "instinct"? Man delights in thinking of himself as only a little lower than the angels. Then why should he not consider the animals as only a little lower than himself? The poet has truly said that "the beast is the mirror of man as man is the mirror of God." Man had to battle with animals for untold ages before he domesticated and made servants of them. He is just beginning to learn that they were not created solely to furnish material for sermons, nor to serve mankind, but that they also have an existence, a life of their own.

Man has long preached this doctrine that he is not an animal, but a kinsman of the gods. For this reason, he has claimed dominion over animal creation and a right to assert that dominion without restraint. This anthropocentric conceit is the same thing that causes one nation to think it should rule the world, that the sun and moon were made only for the laudable purpose of giving light unto a chosen few, and that young lambs playing on a grassy hillside, near a cool spring, are just so much mutton allowed to wander over man's domain until its flavour is improved.

It is time to remove the barriers, once believed impassable, which man's egotism has used as a screen to separate him from his lower brothers....