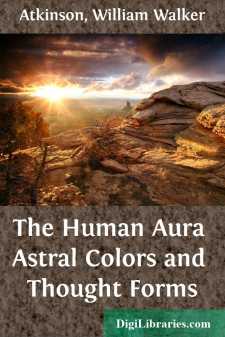 CHAPTER I. WHAT IS THE HUMAN AURA?

The above question is frequently asked the student of occultism by some one who has heard the term but who is unfamiliar with its meaning. Simple as the question may seem, it is by no means easy to answer it, plainly and clearly in a few words, unless the hearer already has a general acquaintance with the subject of occult science. Let us commence at the beginning, and consider the question from the point of view of the person who has just heard the term for the first time.

The dictionaries define the word aura as: "Any subtle, invisible emanation or exhalation." The English authorities, as a rule, attribute the origin of the word to a Latin term meaning "air," but the Hindu authorities insist that it had its origin in the Sanscrit root Ar, meaning the spoke of a wheel, the significance being perceived when we remember the fact that the human aura radiates from the body of the individual in a manner similar to the radiation of the spokes of a wheel from the hub thereof. The Sanscrit origin of the term is the one preferred by occultists, although it will be seen that the idea of an aerial emanation, indicated by the Latin root, is not foreign to the real significance of the term.

Be the real origin of the term what it may, the idea of the human aura is one upon which all occultists are in full agreement and harmony, and the mention of which is found in all works upon the general subject of occultism. So we shall begin by a consideration of the main conception thereof, as held by all advanced occultists, ancient and modern, omitting little points of theoretical variance between the different schools.

Briefly, then, the human aura may be described as a fine, ethereal radiation or emanation surrounding each and every living human being. It extends from two to three feet, in all directions, from the body. It assumes an oval shape—a great egg-shaped nebula surrounding the body on all sides for a distance of two or three feet. This aura is sometimes referred to, in ordinary terms, as the "psychic atmosphere" of a person, or as his "magnetic atmosphere."

This atmosphere or aura is apparent to a large percentage of persons in the sense of the psychic awareness generally called "feeling," though the term is not a clear one. The majority of persons are more or less aware of that subtle something about the personality of others, which can be sensed or felt in a clear though unusual way when the other persons are near by, even though they may be out of the range of the vision. Being outside of the ordinary range of the five senses, we are apt to feel that there is something queer or uncanny about these feelings of projected personality. But every person, deep in his heart, knows them to be realities and admits their effect upon his impressions regarding the persons from whom they emanate. Even small children, infants even, perceive this influence, and respond to it in the matter of likes and dislikes.

But, human testimony regarding the existence and character of the human aura does not stop with the reports of the psychic senses to which we have just referred. There are many individuals of the race—a far greater percentage than is generally imagined—who have the gift of psychic sight more or less developed. Many persons have quite a well-developed power of this kind, who do not mention it to their acquaintances for fear of ridicule, or of being thought "queer." In addition to these persons, there are here and there to be found well-developed, clear-sighted, or truly clairvoyant persons, whose powers of psychic perception are as highly developed as are the ordinary senses of the average individual. And, the reports of these persons, far apart in time and space though they may be, have always agreed on the main points of psychic phenomena, particularly in regards to the human aura.

To the highly developed clairvoyant vision, every human being is seen as surrounded by the egg-shaped aura of two or three feet in depth, more dense and thick in the portion nearest the body, and then gradually becoming more tenuous, thin and indistinct as the distance from the body is increased....