The House that Jill Built after Jack's had proved a failure 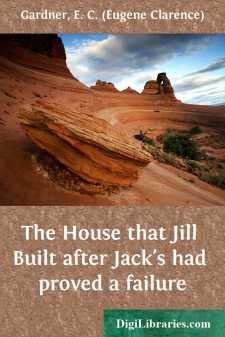 CHAPTER I. A WISE FATHER AND A GLAD SON-IN-LAW.

mong the wedding-presents was a small white envelope containing two smaller slips of paper. On one of these, which was folded around the other, was written,

"A New House, From Father."

The enclosed slip was a bank-check, duly stamped and endorsed. Did any old wizard's magic-box ever hold greater promise in smaller compass! Certainly not more than the bride saw in imagination as she read the figures upon the crisp bit of tissue. Walls, roof and stately chimneys arose in pleasant pictures before her mental vision. There were broad windows taking in floods of sunshine; fireplaces that glowed with living flames and never smoked; lazy lounging places and cosy corners for busy work or quiet study; sleepy bed-rooms; a kitchen that made housework the finest art and the surest science, and oh, such closets, such stairways, such comforts! such defiance of the elements, such security against cold and heat, against fire, flood and tempest! such economy! such immunity from all the ills that domestic life is heir to, from intractable servants to sewer-gas!

If some ardent esthete had arrested her flight of fancy by asking whether she found room for soul-satisfying beauty, she would have dropped from her air-castle, landing squarely upon her feet, and replied that if her house was comfortable and told no lies it would be beautiful enough for her—which was saying a great deal, however interpreted, for she loved beauty, as all well-balanced mortals ought, and she would have been conspicuously out of place in a house that was not beautiful.

Perhaps I ought to explain that the house that Jack built, intending to establish Jill as its mistress when it should be completed, had proved most unsatisfactory to that extremely practical young woman. In consequence, she had obstinately refused to name the happy day till the poor, patient fellow had kept bachelor's hall nearly a year. At last, in consideration of an unqualified permission to "make the house over" to any extent, the rough place that threatened to upset them was made smooth. Her father's present, wisely withheld till peace was declared, left nothing to be desired, and they started on their wedding journey as happy as if they owned the universe. This excursion, however, came near being a failure from the sentimental standpoint, because, wherever Jill discovered a house that gave any outward sign of inward grace, it must be visited and examined as to its internal arrangements. Naturally this struck Jack as an unromantic diversion, but he soon caught the spirit, and after much practice gave his salutatory address with apparent eagerness:

"My wife and I happen to be passing through town and have been struck by the appearance of your house. Will you kindly allow us to have a glimpse of the interior?"

The request was invariably granted, for nothing is more gratifying than the fame of having the "finest house in town." Unhappily the interiors were never satisfactory to Jill, and her valedictory to the owners of the striking houses seldom went beyond thanks for their courtesy....