The House of Torchy 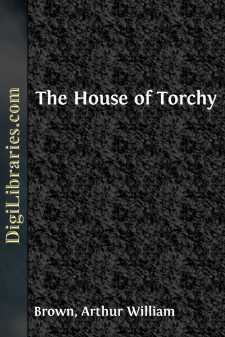 CHAPTER I TORCHY AND VEE ON THE WAY

Say, I thought I'd taken a sportin' chance now and then before; but I was only kiddin' myself. Believe me, this gettin' married act is the big plunge. Uh-huh! Specially when it's done offhand and casual, the way we went at it.

My first jolt is handed me early in the mornin' as we piles off the mountain express at this little flag stop up in Vermont, and a roly-poly gent in a horse-blanket ulster and a coonskin cap with a badge on it steps up and greets me cheerful.

"Why, I expect so," says I, "if that's the way you call it. Otto—Otta—Yep, that listens something like it."

You see, Mr. Robert had said it only once, when he handed me the tickets, and I hadn't paid much attention.

"Aye gorry!" says the chirky gent, gatherin' up our hand luggage. "Guess you're the ones we're lookin' for. Got yer trunk-checks handy?"

With that I starts fishin' through my pockets panicky. I finds a railroad folder, our marriage certificate, the keys to the studio apartment I'd hired, the box the ring came in, and——

The driver grins good-natured and stows us into a two-seated sleigh, and off we're whirled, bells jinglin', for half a mile or so through the stinging mornin' air. Next thing I know, I'm bein' towed up to a desk and a hotel register is shoved at me. Just like an old-timer, I dashes off my name—Richard T. Ballard.

The mild-eyed gent with the close-cropped Vandyke and the gold-rimmed glasses glances over at Vee.

"Ah—er—I thought Mrs. Ballard was with you!" says he.

That's why, while we're fixin' up a bit before goin' down to breakfast, I has this little confidential confab with Vee.

"It's no use, Vee," says I. "I'm a rank amateur. We might just as well have rice and confetti all over us. I've made two breaks already, and I'm liable to make more. We can't bluff 'em."

"Who wants to?" says Vee. "I'm not ashamed of being on my honeymoon; are you?"

"I know," says Vee. "And I always thought that was perfectly silly. Besides, I don't believe we could fool anyone if we tried. It's much simpler not to bother. Let them guess."

Say, that's the happy hunch. Leaves you with nothing to worry about. All you got to do is go ahead and enjoy yourself, free and frolicsome. So when this imposin' head waitress with the forty-eight bust and the grand duchess air bears down on us majestic, and inquires dignified, "Two, sir?" I don't let it stagger me.

"Two'll be enough," says I. "But whisper. Seein' as we're only startin' in on the twosome breakfast game, maybe you could find something nice and cheerful by a window. Eh?"

It's some breakfast. M-m-m-m! Cute little country sausages, buckwheat cakes that would melt in your mouth, with strained honey to go on 'em....