The House of Rimmon A Drama in Four Acts 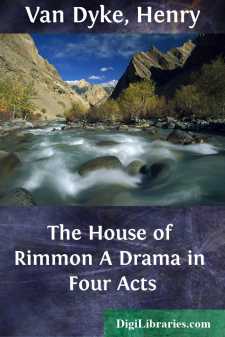 Night, in the garden of NAAMAN at Damascus. At the left, on a slightly raised terrace, the palace, with softly gleaming lights and music coming from the open latticed windows. The garden is full of oleanders, roses, pomegranates, abundance of crimson flowers; the air is heavy with their fragrance: a fountain at the right is plashing gently: behind it is an arbour covered with vines. Near the centre of the garden stands a small, hideous image of the god Rimmon. Back of the arbour rises the lofty square tower of the House of Rimmon, which casts a shadow from the moon across the garden. The background is a wide, hilly landscape, with a high road passing over the mountains toward the snow-clad summits of Mount Hermon in the distance. Enter by the palace door, the lady TSARPI, robed in red and gold, and followed by her maids, KHAMMA and NUBTA. She remains on the terrace: they go down into the garden, looking about, and returning to her.

There's no one here; the garden is asleep.

The flowers are nodding, all the birds abed,

And nothing wakes except the watchful stars!

The stars are sentinels discreet and mute:

How many things they know and never tell!

Unlike the stars, how many things you tell

And do not know! When comes your master home?

Lady, his armour-bearer brought us word

An hour ago, the master will be here

At moonset, not before.

He haunts the camp

And leaves me much alone; yet I can pass

The time of absence not unhappily,

If I but know the time of his return.

An hour of moonlight yet! Khamma, my mirror!

These curls are ill arranged, this veil too low,--

But warn me if your master should appear.

Mistress, have no concern; for when we hear

The clatter of his horse along the street,

We'll run this way and lead your dancers down

With song and laughter,--you shall know in time.

My guest is late; but he will surely come!

Hunger and thirst will bring him to my feet.

The man who burns to drain the cup of love,--

The priest whose greed of glory never fails,--

Both, both have need of me, and he will come.

And I,--what do I need? Why everything

That helps my beauty to a higher throne;

All that a priest can promise, all a man

Can give, and all a god bestow, I need:

This may a woman win, and this will I.

[Enter REZON quietly from the shadow of the trees. He stands behind TSARPI and listens, smiling, to her last words. Then he drops his mantle of leopard-skin, and lifts his high-priest's rod of bronze, shaped at one end like a star, at the other like a thunderbolt.]

The mistress of the house of Naaman

Salutes the keeper of the House of Rimmon.

[She bows low before him.]

Rimmon receives you with his star of peace;

[He lowers the star-point of the rod, which glows for a moment with

rosy light above her head.]

And I, his chosen minister, kneel down

Before your regal beauty, and implore

The welcome of the woman for the man.