The House in the Water A Book of Animal Stories 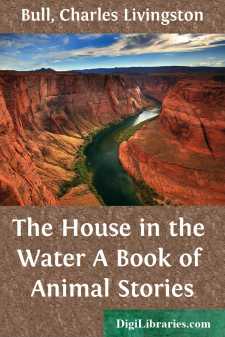 CHAPTER IThe Sound in the Night

UPON the moonlit stillness came suddenly a far-off, muffled, crashing sound. Just once it came, then once again the stillness of the wilderness night, the stillness of vast, untraversed solitude. The Boy lifted his eyes and glanced across the thin reek of the camp-fire at Jabe Smith, who sat smoking contemplatively. Answering the glance, the woodsman muttered “old tree fallin’,” and resumed his passive contemplation of the sticks glowing keenly in the fire. The Boy, upon whom, as soon as he entered the wilderness, the taciturnity of the woodsfolk descended as a garment, said nothing, but scanned his companion’s gaunt face with a gravely incredulous smile.

So wide-spread and supreme was the silence that five seconds after that single strange sound had died out it seemed, somehow, impossible to believe it had ever been. The light gurgle of the shallow and shrunken brook which ran past the open front of the travellers’ “lean-to” served only to measure the stillness. Both Jabe and the Boy, since eating their dinner, had gradually forgotten to talk. As the moon rose over the low, fir-crested hills they had sunk into reverie, watching the camp-fire die down.

At last, with a sort of crisp whisper a stick, burnt through the middle, fell apart, and a flicker of red flame leaped up. The woodsman knocked out his pipe, rose slowly to his feet, stretched his gaunt length, and murmured, “Reckon we might as well turn in.”

“That’s all right for you, Jabe,” answered the Boy, rising also, tightening his belt, and reaching for his rifle, “but I’m going off to see what I can see. Night’s the time to see things in the woods.”

Jabe grunted non-committally, and began spreading his blanket in the lean-to. “Don’t forgit to come back for breakfast, that’s all,” he muttered. He regarded the Boy as a phenomenally brilliant hunter and trapper spoiled by sentimental notions.

To the Boy, whose interest in all pertaining to woodcraft was much broader and more sympathetic than that of his companion, Jabe’s interpretation of the sound of the falling tree had seemed hasty and shallow. He knew that there was no better all-round woodsman in these countries than Jabe Smith; but he knew also that Jabe’s interest in the craft was limited pretty strictly to his activities as hunter, trapper and lumberman. Just now he was all lumberman. He was acting as what is called a “timber-cruiser,” roaming the remoter and less-known regions of the wilderness to locate the best growths of spruce and pine for the winter’s lumbering operations, and for the present his keen faculties were set on the noting of tree growths, and water-courses, and the lay of the land for the getting out of a winter’s cutting. On this particular cruise the Boy––who, for all the disparity in their years and the divergence in their views, was his most valued comrade––had accompanied him with a special object in view. The region they were cruising was one which had never been adequately explored, and it was said to be full of little unnamed, unmapped lakes and streams, where, in former days, the Indians had had great beaver hunting....